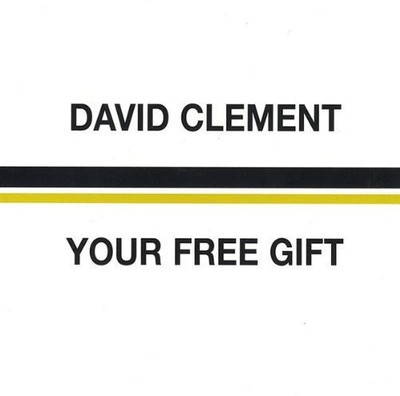 'Quirky, adventurous and stubbornly intelligent...' - Jason Warburg, THE DAILY VAULT 'This is really a great album consisting of avant garde rock with intriguing song writing.' - J-Sin, SMOTHER.NET Liz Phair's pal David Clement suffered though more than his share of major-label nightmares while bringing this sophomore disc to the public. Which is a shame, because YOUR FREE GIFT's skewed melodies, spot-on instrumentation, and propulsive pop-rock (a la David Byrne fronting the Attractions) makes for an effervescent, surprisingly substantial listen - like a candy bar that's somehow good for you. Hopefully the 'kids' can get their hands on this baby somehow - Nick, SLATCH.COM 'The breathy vocals are a sharp contrast to the hard-driving music. And the tug-o-war between the two elements create a tension that's hard to ignore. The production is so over-original that it technically breaks new sonic ground. It's rare to find such a revelation in original music. Not only are the lyrics deep, but the music, the production, and the vocals all blend in some multi-layered smorgasbord to create a type of complex maze...decipherable only if one allows the subconscious to take control. Hard to believe that humans could operate at such an atmospheric realm.' - Independent Songwriter Magazine The music is diverse and shows David as quite an adaptable singer/songwriter and a good judge of musicians. The music on YOUR FREE GIFT is ready for mainstream and has enough twists to keep it different. This intelligent songwriter may have his day in the spotlight yet. Try if you like: Big Head Todd, Aimee Mann - MusicEmissions.com 'smart ... hypnotic ... honest' - Gregg Shapiro, WINDY CITY TIMES / NEXT MAGAZINE '...the CD becomes more compelling with each play... catchy and smart.' - Melton, E-PULSE (TOWER RECORDS) 'It's main merit is that it takes difficult and idiosyncratic songs and makes them catchy and personal with effective melodies. The sound of vintage keyboards and vocals overdubbed in ingenious choruses grab the attention of the listener...' - Salvatore Patti, MUSICBOOM.IT (translated from Italian by: David Warren) 'The fact that YOUR FREE GIFT, by the American singer David Clement, has ever seen the light of day may be seen as a small miracle. His acoustic debut, 'Be More Like Me', got some great reviews and got him a contract with the major label Mercury Records. By the time Clement had finished recording his second CD, 'Hard Candy', it appeared that this contract was worth even less than the paper it was written on. Mercury was taken over by Universal, 'reorganized,' and Clement was put aside. The release of 'Hard Candy' was postponed without any concrete promises for the future; the album seemed lost forever in the legal battle that followed. After a few years and many lawsuits, Clement has claimed his right to RE-record 'Hard Candy', and the result is an astonishingly good album titled Your Free Gift. This album has ... a very uncommon yet familiar sound that only emphasizes the high quality and clarity of the compositions, which could easily stand by themselves. 'Geriatriphilia' is absolutely amazing; this song is simultaneously witty, moving, melancholic and astute, in a little under three minutes. With hypnotizing guitar chords and a flair for subtle lyrics, David Clement can be found between REM, Ryan Adams and Eels, deep in the territory of accessible, well-written alternative music.' - Eelco Van Kappen, KINDAMUSIK (translated from Dutch by: Piete)

Here's what you say about
David Clement - Your Free Gift.