Charley Thweatt - You're An Angel 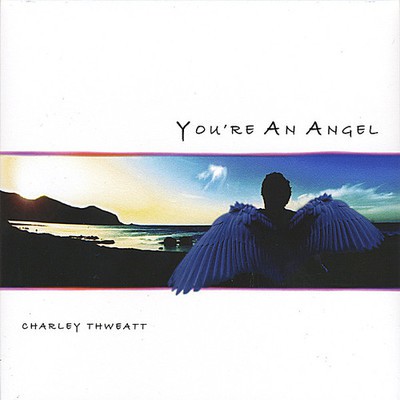 The title track, 'You're an Angel,' is perhaps my most 'famous' song. I've watched it transform a room of people into open hearted angels year after year after year. This CD contains several of my 'classics,' that I always include in my concerts. The sound is very much acoustic guitar and voice, with some bass, piano and drum added sparingly. And each song has an amazing story behind it, that I could still tell you today. This CD is a hybrid of the early me and the current me. This recording was originally released in 1983 on cassette. Then it went through a major 'remodeling' in the studio in 2004 and 2005. This included new vocals on most songs, new guitar tracks, added drums, rearrangements and added a cappella sections, etc. BIO - Charley Thweatt has a talent for turning a room full of strangers into connected family. He does this with his original music, his angel singing voice and his insightful talks and workshops. Charley has been a presenter for spiritual organizations and metaphysical conferences for 27 years, throughout the U.S., Canada, Europe, Australia and Japan. He has also been the musical opener for such luminaries as Wayne Dyer, Marianne Williamson, Deepak Chopra, Louise Hay, Ram Dass and more. Charley has appeared on national television and radio with his songs, including You're an Angel, Take Your Power Back and Dancers in the Light. Here are some more words from Charley: I was born a middle class white child. In Texas. In the suburbs. In the 50's. The road from there has been a venture in faith with fantastic heart openings all along the way. After graduating college in architecture and working three years in the field, my heart really wasn't in it. A search for 'something more' launched me into a spiritual journey of many deep awakenings. My songwriting reflected this shift, and friends urged me to perform for various gatherings. The fear was huge, but I knew I had to sing. And I did. Music has always been in my blood. In the third grade I discovered what a joy it is to sing. Over the next four years I learned to play several instruments, including piano and guitar. My love of music, and it's magic, also led me to believe my junior high buddies and I could be just like the Beatles. Sound familiar? Throughout high school and college, I continued to play guitar and sing for fun, never knowing it would someday lead to my livelihood. Following two false starts, I vaulted into my musical healing career, and now 20 years later, I can honestly say that I must have been absolutely crazy. Well, I know it looked crazy to my family and friends. Yet I persisted. It felt like I was asking God to help me 'walk on water.' There was no visible means of support, yet somehow I didn't drown. Thank you, God! My career has taken me all around the U.S. and recently to eight other countries. I've recorded several CD's, performed hundreds of spiritually healing concerts, and co-presented workshops with many famous teachers in the Human Potential movement. I'm especially excited about an ongoing sense of new adventures and stretching myself into uncharted territory. I make my home in Santa Cruz, California, and have a teenage son who loves to sing, too, and occasionally travels with me. I spent seven years touring intensely with my good friend, author Alan Cohen (The Dragon Doesn't Live Here Anymore, Joy Is My Compass, Handle With Prayer). I am a regular performer and workshop leader at the very moving Network Chiropractic Transformational Gate weekends, which are held all around the country. I've also had the honor of sharing the stage and/or co-leading events with many notable leaders in our field, including Jerry Jampolsky, Hugh Prather, Ram Dass, Terry Cole-Whitaker, Jean Houston, Patricia Sun, Deepak Chopra, Bernie Siegel, Barbara Marx Hubbard, Louise Hay, Barry & Joyce Vissell, Barbara King, Leo Booth, Michael Beckwith, Mary Manin Morrissey, Shakti Gawain, Donald Epstein and Wayne Dyer.

Here's what you say about
Charley Thweatt - You're An Angel.