Romans - You Only Live Once 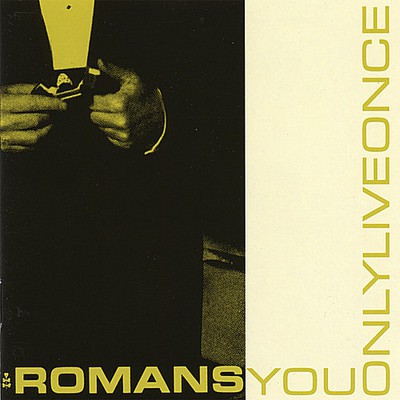 Though short-lived, the Romans brought together some of the more interesting musicians on the Los Angeles underground rock scene who created a prescient blend of post-punk artiness, instrumental rock stylings, and the dusty loneliness of country music. The Romans first came together in the early '80s as principle songwriter and bassist Michael Uhlenkott and percussionist Keith Mitchell, who'd worked together in the band Monitor, joined forces with guitarist and co-writer Juan Gomez from Human Hands and Pat Delaney from B People on saxophone. Before the band recorded their first album in 1983, You Only Live Once, the Romans had added a second guitarist, Mikey Borens, a former member of the Consumers. (Another member of the Consumers, Paul D. Cutler, produced the sessions.) By the time the band recorded their second (and final) album in 1986, The Last Days at the Ranch, Borens had left the band and was replaced on guitar by Robert Lloyd, while Delaney had resigned as a full-time member of the band, though he still played occasional live shows with them. Keyboard player Chris Cacavas also played on The Last Days at the Ranch and often joined the band on-stage. Following the breakup of the Romans, Uhlenkott retired from music to concentrate on visual art. Keith Mitchell joined Chris Cacavas in his other band, Green on Red; after Green on Red folded, Mitchell performed with Opal and Mazzy Star, while Cacavas launched a solo career. Robert Lloyd became a sideman, working primarily with John Wesley Harding, but also with Steve Wynn, Paul Kelly, and Neko Case. And finally, Juan Gomez re-formed Human Hands.

Here's what you say about
Romans - You Only Live Once.