Redhill - You Get What You Get 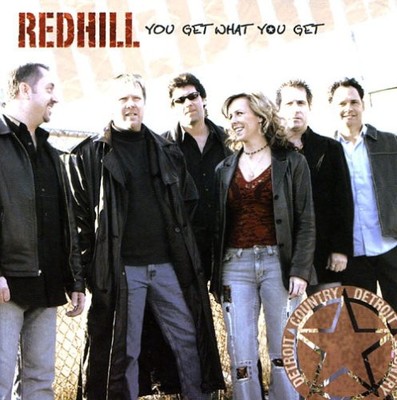 Redhill: A Country music performance group from Detroit, Redhill has developed a unique style they call 'Detroit Country' -- Detroit-rock-and-Motown-influenced Country Music. Motown and Rock have been the prominent sounds coming out of Detroit for half a century, so it is no small wonder that these influences are in the heart and soul of the sound that is Redhill today. Redhill combines a group of seasoned music veterans, strong songwriters, and a sexy, soulful lead singer who all love to perform live. An energetic and upbeat live show has become the group's trademark. Redhill has opened for Kenny Chesney, Gretchen Wilson, Carrie Underwood, Clint Black, Dwight Yoakam (at DTE), Heartland, Bomshel, Gary Nichols, Hot Apple Pie, Tony Phillips, Mitch Rider, Lee Roy Parnell,as well as country great Clay Walker at the Freedom Hill Amphitheater in Detroit. They received the Detroit Music Award for Outstanding Country Album in 2007 and were the only country band nominated in all five categories. In '06,'07,and '08 they've received 10 nominations for : Outstanding Country Group/Artist (3) Outstanding Country Vocalist: Julianne (2) Outstanding Songwriter: Greg Michaels (2) Outstanding Instrumentalist: Greg Michaels Outstanding Country Recording (2) In 2008, they will return to stage for the third year in a row at the Detroit Downtown Hoedown; the largest outdoor country concert in the nation with acts such as Terri Clark, Josh Gracin, Aaron Tippin, Miranda Lambert, Rodney Adkins, Trent Tomlinson, The Wreckers, Carolina Rain, Bucky Convington and many more. Redhill has also been asked to perform at the Farwell Mountain Country Fest in Farwell Michigan in June 2008. Redhill has performed at the famous Bluebird Cafe in Tennessee on several occasions to a packed room. They have also showcased at 3rd & Lindsley in Nashville. Their new CD entitled 'You Get What You Get' was released at Memphis Smoke in Royal Oak, Michigan on August 20th, 2006. They are currently working on their sophomore CD, due out in late spring of '08. Redhill has performed several times live on television and on live radio on the Mitch Albom show as well in Detroit. They are currently touring regionally in Michigan and Ohio, Indiana and Tennessee. Instrumentation Julianne - lead vocals/songwriter/guitar Greg Michaels - Rhythm guitar/vocals/songwriter Jay Fiondella - Drums, percussion Jon Lenardon - Lead guitar Ramon Landicho - Bass, vocals Discography 2007 'It's Christmas Time in Detroit City' - single 2007 'This Train Ain't Thru Runnin Yet' - single 2006 Award winning 'You Get What You Get' full CD 2005 4 song ep 'You Get What You Get' includes the group's radio singles, 'All Night Long' and 'I can Make It.' (both receiving airplay on Michigan country radio stations WSAQ, WTNR, WCXI and B95.fm Flint). WYCD, the largest country radio station in Detroit has currently been playing 'Just Another Day' and it's climbed to number 12 on the clearchannel.com new music charts. 'It's Christmas Time In Detroit City' debuted on Channel 7 at the Campus Martius treelighting ceremony for the city of Detroit. It recieved regular rotation airplay on may radio stations throughout the nation 'This Train Ain't Thru Runnin Yet' is a single written by Greg Michaels for his sister who passed away of cancer in 2006. All proceeds from this single will go to benefit Gilda's Club.

Here's what you say about
Redhill - You Get What You Get.