Jim Pearce - You Are An Edgy Visionary Seer 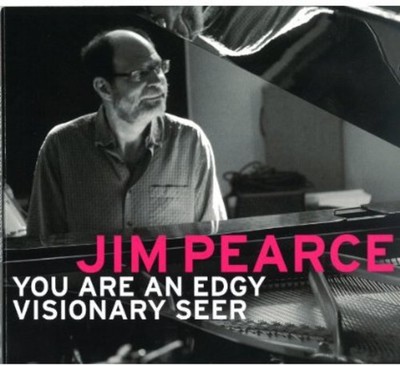 "You Are an Edgy Visionary Seer" is Jim's 7th CD release. It contains 10 of his originals, including 5 vocal tunes and 5 instrumentals. Jim's last CD "I'm In the Twilight of a Mediocre Career" hit #1 on the JazzWeek Jazz Radio Chart and was featured on NPR's Morning Edition in an interview with Susan Stamberg. Jim's tunes have been heard in many TV Shows including "Saturday Night Live" (NBC), "Parenthood" (NBC), "Lipstick Jungle" (NBC), "Greek" (ABC), "Last Call with Carson Daly" (NBC) and many others. He has written 100's of tunes. He's also been the recipient of numerous awards including Grand Prize/Jazz Category in the John Lennon Songwriting Contest. Press Quotes 'Pearce's seventh release as a leader, You Are An Edgy Visionary Seer is an engaging and well-rounded portrait of this uniquely talented songwriter, vocalist and pianist at his mature and creative peak.' Hrayr Attarian/AllAboutJazz "Jim Pearce is in possession of a special type of "triple threat." I don't know if he can dance or act. That's not the kind I mean. What Pearce certainly can do is sing, play piano and write great music." Jazz Improv Magazine/ Dave Miele "There exists a unique and storied subset of jazz artists who pen the most clever music and lyrics this side of Tin Pan Alley and way that side of modern-day Nashville. Besides Bob Dorough and Dave Frishberg, who are in a class by themselves, are Mose Allison and Jim Pearce, who are also part of that rarefied class." C. Michael Bailey/ AllAbout Jazz "Singing pianist is incredibly hip, but please don't tell him. It might ruin his hangdog charm, which stacks up favorably alongside witty songsters such as Bob Dorough, Dave Frishberg and Mose Allison." ----Jazziz Magazine 'Jim Pearce, a long time favorite is great! I absolutely love it, his piano work is top class.' Peter Kuller, Radio Adelaide - Australia "Never Open with a Ballad is a delightful collection of modern jazz performed by an outstanding collective of sympathetic musicians who are truly deserving of wider recognition. Pearce proves himself a highly adept leader who approaches every aspect of his music with vision and integrity." All About Jazz/ John Barron "Pearce has produced another winner. This is outstanding mainstream jazz. Washington Square Park is a powerful reminder that not all great jazz pianist/composers are signed to Verve or Blue Note-or work out of New York" All About Jazz / Paul Olson "Jim Pearce reminds me somewhat of Bob Dorough and Dave Frishberg, you see. Fans of both will enjoy this CD along with Mr. Pearce's fine piano playing."The Jazz Rendezvous /Eric Alan "quirkily original pianist/ songwriter" DOWNBEAT/ Michael Jackson "Jim is an extraordinarily talented musician and those skills are matched by his songwriting abilities. It is easy to see why he has earned many songwriting awards during his illustrious career. His stories and their imaginative lyrics create vivid images that one does not soon forget, or want to. And his piano riffs continue to play in your head long after his music stops." Roots Music Report/ Brenda Barbee.

Here's what you say about
Jim Pearce - You Are An Edgy Visionary Seer.