Arne Fogel & the Wolverines Quartet - Wrap Your Troubles in Dreams 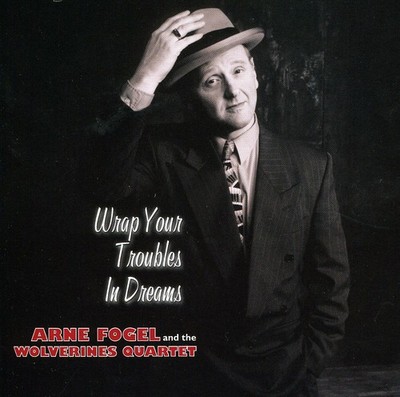 Album Description: 'Wrap Your Troubles In Dreams' features Minneapolis-based vocalist Arne Fogel in tandem with the Wolverines Quartet in a handful of standard tunes by such writers as Cole Porter, Irving Berlin, Lerner & Loewe, Sammy Cahn, Johnny Mercer, Willard Robison, Harry Barris, Harold Arlen, Harry Warren, and others. The performances are all free-wheeling swingers or heart-felt ballads, offered in straight-ahead, sincere, yet powerful fashion. Fogel's vocals are of the Crosby - Sinatra - Astaire - Bennett school, highly influenced by those stylists. About the Artist: Arne Fogel is a top vocalist at Twin Cities jazz venues such as The Times, The Dakota, Cafe Luxx, Orchestra Hall, and many others, and is a veteran of over 1,500 recording sessions as a singer, actor or announcer on commercials and film soundtracks (That's Arne singing 'I'll Be Seeing You' in the recent 'TUESDAY MORNING' TV commercial featuring LAUREN BACALL). Arne performed as the opening act for Rosemary Clooney at Orchestra Hall in Minneapolis in December of 2001. He was, for many years, a regular performer on Public Radio's 'A Prairie Home Companion', and for many years has created popular radio programs for such outlets as the Minnesota Public Radio Network, and KLBB-AM 1400 in the Twin Cities area. The Wolverines are the top 'swing' aggregation in the Twin Cities, led by drummer Brett Forberg. Comments: "....I was hooked from the first track to the last. Your vocals and the backings were a joy to listen to. The whole album was done with taste and care and your singing style is really very distinctive and owes nothing to anyone. The Wolverines Quartet are a splendid unit and the album is full of stylistic surprises that enhance (without distracting from) the songs...." --- Ken Barnes, Record Producer (Bing Crosby, Fred Astaire, Jack Jones, Johnny Mercer, Peggy Lee) in a letter to the artist 'Arne Fogel: For many Minnesotans he's a household word - that jazz singer with a mellow voice who's as reliably there as the seasons...' -Dave Matheny, Mpls. Star-Tribune 'What Fogel does is subtle. His baritone is good bourbon on the rocks - sweet with a touch of snap. He's the guy you don't fall for fast - but who wins you over completely with a wistful blend of warmth and flashes of wit.' -Lydia Howell, Minneapolis Observer 'Fogel himself wears many hats and under one of them he is perhaps the Twin Cities' finest male singer of classic American popular song.' -Bob Lingner, Twin Cities Jazz Society 'Jazz Notes' 'Fogel does it all well, with grace, conviction, and a pretty good set of pipes!' -William J. Schafer (Author of 'The Art Of Ragtime'), Mississippi Rag 'Arne Fogel's a part of the cultural weave of Minnesota......(His album's) song style is pure Fogel -- clear, simple and evocative songs from the '20s, '30s, & '40s.' -George Monaghan, Mpls. Star-Tribune 'What Fogel finds - and presents - could pass for audio scholarship as well as faithful preservation of pop culture before rock 'n' roll blew the lid off.' - Martin Keller, Twin Cities Reader 'Fogel's encyclopedic knowledge of pop music shines....only someone steeped in the history of popular music could have come up with such gems, and mixed them with classics.....' - Tom Webber, Rochester Post-Bulletin 'As a performer, his songs delight audiences of all ages...... he is one of the area's most knowledgeable historians about lyricists and songwriters.' -Carol Simpson, Board of Directors & former Activities Chair, Twin Cities Jazz Society 'Arne brings his talents as an actor and singer to presentations of the creative work of this country's foremost musicians.....His deep understanding of the context from which the music and musicians emerge provides a solid basis for sharing his affection and knowledge with his audience.' -Marilyn Heltzer, Station Manager KCRB-FM Bemidji, MN. Former Vice-President of programming, Minnesota Public Radio 'Arne is a very good singer in the great tradition, who deserves to be heard.....His singing has it's own distinct style & flavor, and he sounds like no one else.' -Michael Lund, Serendipidy Records International Catalogue 'Arne Fogel is one of the Twin Cities most interesting people -- A singer, musician, actor, composer, writer, producer, music-film-comedy and entertainment historian, collector and oral encyclopedia.' -Bob Protzman, St.Paul Pioneer Press-Dispatch 'With great care for what the composer and lyricist had in mind Arne Fogel places his subtle signature over a collection of American standards. Fogel understands those messages, and you will too.' -Leigh Kamman, THE JAZZ IMAGE â?¢ Minnesota Public Radio.

Here's what you say about
Arne Fogel & the Wolverines Quartet - Wrap Your Troubles in Dreams.