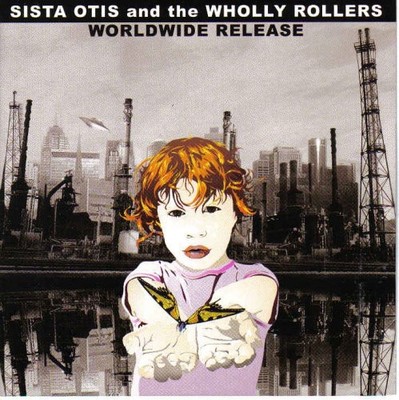 This sound was born in Detroit, could only be born in Detroit. As the story goes, in a lil' Jazz club downtown after hours...a few drinks and clouds of reefer hangin' in the air...Lady Blues was feeling the Soul from Motown, so she Hip-Hopped up on Motown's lap, Rocked back and forth and got the Funk on. Meanwhile, Folk wondered in off the streets with crazy hair and dark shades and wrote the story down. On that night, Sista Otis and the Wholly Rollers were conceived. Biography The, 'Original Good Time Girl' Sista Otis released her Debut Award Winning studio Album, Worldwide Release in 2004. With air play in 12 different countries and coast to coast on college and public radio in the States, a write up in Roiling Stone, Advocate named her one of the top Indie Artist in the U.S. but the real proof in in the live performance. Sista Otis is a one woman band. A party with just a acoustic guitar, vocals and song writing with classic elements, reminiscent of the late 60's. Bringing her Singer/Songwriter Blues inspired rock-hip hop with gospel rhythms to The People. A Poet, Storyteller, Lyricist, Master Melody Maker and Improve Artist. Song structures so diverse and truly original yet so familiar and warm that you feel like you've heard them before. Strong with rhythm and addictive hooks and lyrics that hit the heart, head and stir your eternal soul. With saucy lil' numbers bout' having the bar tender pour another round to This love is spiritual. She's sassy, charming and raw. She can easily do an adult show, kids show or a gospel show at the church on your corner. Knowing and understanding how to serve the people. She is, 'The Original Good Time Girl' and the Good Time Revolution is in full effect when Otis i is up in the house. .....Sooooo what are you waiting for? Book her in your venue now and let our team at Wholly Rollers Records send you posters, start pushing radio and press in your city. * Mentioned in the Rolling Stone * Featured on the cover of Metro Times * Awarded 4 Detroit Music Awards * Highest Nominated Band in Detroit. -DMA 2004 * Nominated for 29 Detroit Music Awards * Voted Best Solo performer. -Real Detroit * Voted for the Cultural Award. -The Annual Pride Banquet Ceremony Highest Nominated Band in the 13 year history of DMA's. Voted Outstanding Rock/Pop Recording. Voted Outstanding Urban/Funk/Hip-Hop Recording. -Detroit Music Awards, 2004 Voted Outstanding Acoustic Group Voted Outstanding Recording (Never Gonna Die) Voted Outstanding Instrumentalist Voted Outstanding Acoustic Folk Artist/Group 'She has enough girl power to fuel a fire and enough soul to make James Brown proud.' -Rachel May, Detroit Free Press. 'Sista Otis has got to be one of the best songwriters to hit Detroit in a very long time.' -Aimee Spencer, Real Detroit 'Worldwide Release holds the potential as the record that can break open the national scene. And it's a great album, full of the variety and depth that Otis is known for. Each song sounds fresh and different from each other. One of the most interactive and fun acts I have seen, she clearly cares about and is unafraid of her audience.' -Lucie Bourgeau, The South End 'Her spunky -- sometimes spittingly so -- new disc is the kind of blast of self-confidence that says an artist has really arrived. Sista Otis is emerging as one of Detroit's most distinctive voices.' - Steve Byrne, Detroit Free Press 'Her spunky -- sometimes spittingly so -- new disc is the kind of blast of self-confidence that says an artist has really arrived. Sista Otis is emerging as one of Detroit's most distinctive voices.' -Steve Byrne, Detroit Free Press 'Sista Otis is a one-of-a-kind figure in the Detroit music scene.' -Melody Baetens, Detroit News 'Perhaps the brightest new light on the singer-songwriter scene, she calls her music 'folk-hip-hop with a Little Rock 'n' roll.' At the Detroit Music Awards in April, Sista Otis and her Wholly Rollers band delivered the night's most memorable performance, an energetic set that left an industry audience impressed. She's begun branching out of Detroit, touring coffeehouses and clubs -- and even busking on sidewalks in New York's Greenwich Village, where she often rakes in more than $40 an hour.' -Brian McCollum, Detroit Free Press 'Motown's hippest folk sensation.' -Jason Michael, Between The Lines. 'Sista Otis is the hardest working women in Detroit Show-Business.' -Jim Dolzo, WDET. 'Legendary Country crooner Johnny Cash once wrote a song about a boy named Sue. But around these parts, it's a girl named Otis that's getting all the attention. Sista Otis to be exact.' -Jason Michael, Between The Lines.

Here's what you say about
Sista Otis & the Wholly Rollers - Worldwide Release.