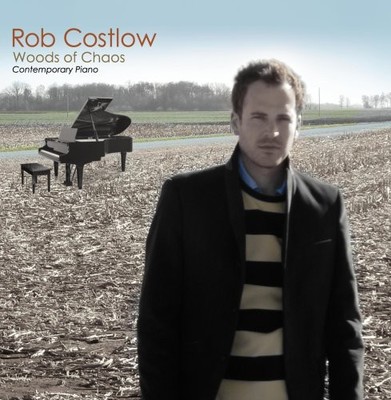 Music lovers of all ages will be transported to a less complicated, more relaxed world with Costlow's collection of original piano melodies that showcase the talent and universal reach of his passionate and raw sound. Even though Costlow's music is often placed with certain genres, his style is neither new age, classical or jazz. Costlow simply delivers independent, sincere and contemporary music to which listeners can easily relate. By the time he was twelve, Rob Costlow was trying his piano instructor's patience by adding his own endings to songs during lessons and recitals. 'I literally despised taking lessons and especially practicing other people's music. It just wasn't for me. I had so many notes running through my head, I wanted to create my own music,' admits Rob. This soon brought an end to the lessons that began at age five. Rob realized that his musical future was going to take a different path than the one set by his teachers. Rob is a true Hoosier born and raised in Indiana. Growing up in a large family helped Rob become focused and tenacious. As the youngest of six boys, Rob got used to seizing every opportunity. In fact, it was one of Rob's brothers that introduced him to contemporary piano music. 'It was so different than the music I studied in lessons,' says Costlow. 'It helped give me the courage to try my own hand at composition. I said to myself 'I can do this!' It was an immediate outlet to express myself and also provide a sense of calm when times were stressful.' At age eleven, Rob lost his mother to ovarian cancer. Even as a young boy, Rob was affected by his mother's constant courage in the face of such adversity. His Mom had and continues to have a huge impact on Rob's life and music. Rob received a Bachelors and Masters degree in Kinesiology from Indiana University, Bloomington (IU). Before transferring to IU as a junior, Rob began his college career as a Piano Performance and Composition major at Ball State University. He then changed majors to Kinesiology as a sophomore, giving an ironic twist to the meaning of Rob's first album, Sophomore Jinx. At IU, Rob was hit by a drunk driver and suffered injuries in both hands resulting in a broken left-hand and carpel tunnel syndrome in his right. Through surgery and physical therapy Rob has recovered, but still feels aching in his hands after an especially extensive piano performance. While working on his Masters Degree at IU, Rob unofficially started his own record label based on a business class project. In 2002, Rob released his first professional solo project, Sophomore Jinx (re-released 2005), containing all original music. In 2004, Rob officially founded TOURIST RECORDS®. Through TOURIST RECORDS®, Rob continues to create and license music. He hopes to inspire other artists to make their own impact in the world. Professionally, Rob has worked for influential New Media companies. It is through the Internet that Rob has connected with many people of different backgrounds and cultures. He has gained fans of all ages worldwide, confirming that people are in need of much more than just your typical 'top 40' music. An admitted perfectionist, Rob will sometimes carry on a conversation longer than it should go. Rob loves to travel, 'cut a rug' when the mood is right, eat pizza and Twizzlers, put ketchup on everything, and spend time with his family. While Rob has come a long way since his childhood lessons, his love for creating original compositions is still at the heart of his contemporary piano music. 'Music is what inspires me,' says Costlow. 'It is in my soul. I never force myself to write. I do it when it comes to me. I take things a day at a time.'

Here's what you say about
Rob Costlow - Woods of Chaos.