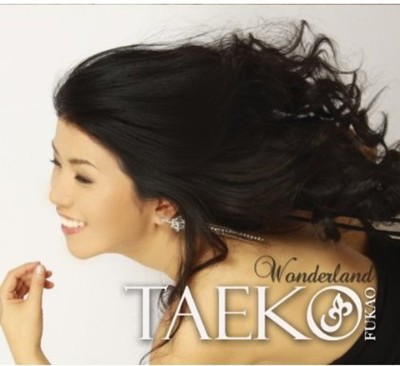 [Liner Notes by Greg Thomas, New York Daily News] Wonder is a quality of emotion usually associated with childhood. Innocence combined with curiosity meets the beauty of the new and we say "Wow." Art and artistry is so powerful across time and place because qualities of childhood such as play, creativity, growth, imagination and wonder remind adults of their own youth. On "Wonderland," the rapidly maturing jazz songstress Taeko Fukao evinces those qualities in collaboration with artists such as the musical genius Doug Carn and veteran drummer Victor Jones in her best record to date. As a child in Japan, Taeko would hear her father and grandfather sing in traditional Japanese styles. Japanese pop music was central to her everyday life until she came to the U.S. for a two-week exchange program during high school. Seeing the movie "The Commitments" then made a strong impression. The comedy-drama featuring an all-Irish music group singing black American soul music planted the seeds of artistry that soon blossomed. While in college, studying law and singing R&B, she thought jazz was too complicated. Yet when she came to New York for six months after graduation, jazz touched her soul: "Jazz music hit me because people play directly from their heart and are energetic. When you go to really good clubs you see the goal that you want to become." Musical friends gave her recordings by such vocal icons as Betty Carter and Shirley Horn. Before long she began study with vocal coaches Juanita Fleming and Marion Cowings to transition from R&B to jazz styling. She made New York her permanent home in 2000. On "Wonderland," Taeko integrates her initial R&B styling with the jazz sophistication honed over the last decade. Her previous studio releases have included songs made popular in the early 1970s by keyboard wizard and band leader Doug Carn. In fact, her rendition of Carn's lyrics to Bobby Hutcherson's "Little B's Poem" on her first date, One Love, made it's way to Carn's ears. Liking what he heard, he had a friend contact Taeko. (She also performed Carn's words and arrangement of Wayne Shorter's "Infant Eyes" on her most previous release, Voice.) Carn has become a mentor and friend. In her live shows Taeko often begins with a medium-tempo version of "Old Devil Moon," so producer Mark Ruffin suggested that she do the same here. Her arrangement utilizes a bass line by Chicago-native Lonnie Plaxico that evokes both "The Creator Has a Master Plan" and Coltrane's A Love Supreme, resulting in a version that pairs romantic lyrics within a spiritual frame. "Wind Beneath My Wings," an anthem to heroism, follows in a mellow 7/4 vein, with a breezy vocal overdub that gives the number a sweet R&B flavor. Taeko chose this song in tribute to the victims of the 2011 hurricane and tsunami that wreaked devastation to her homeland. Having established a cool vibe via the first songs, "Softly As In a Morning Sunrise" ramps up the tempo and intensity, a swinging 4/4 version that accentuates Jones's drumming prowess as well as the entire ensemble's cheerful drive. It's a feeling that the late writer Albert Murray called the "velocity of celebration." "If You Could See Me Now" by Tadd Dameron is a delight, as Taeko is joined by vocalist Giacomo Gates. His tenor register blends with Taeko's alto like a warm embrace. Stacy Dillard's blues-informed obbligato riffs billow just the right element of hope amidst wistful clouds. Carn's piano tinkles introduce Coltrane's "Naima," evoking memories of his version with Jean Carne, yet arranged a slightly faster tempo for Taeko's rendition. She floats over the rhythms like a surfer riding a wave. "Fooling Myself," a fun, short number performed in years past by Billie Holiday, Betty Carter and Shirley Horn, is vehicle for demonstrating subtle emotional range, facing up to reality by edging toward laughter to keep from crying. "Alice in Wonderland" serves as the recording's centerpiece thematically and in song order. Taeko says that it's about "the imagination, dreaming, and that age is just a number. We can be young at any age." Think of that message while listening to the call-and-response interplay between Taeko's scat and Dillard's flowing exclamations. Singing several verses in Japanese and one for her English listeners, Taeko's "Lullaby of Takeda" is akin musically to the structure of "Summertime." The song is a tale about a young girl longing for home, but who's stuck baby-sitting. Producer Ruffin suggested to Taeko an early Earth, Wind & Fire song on which Doug Carn originally performed, "I Think About Lovin' You." Her long-time guitarist Kevin McNeal makes a brief solo appearance on this excellent selection that fulfills Taeko's desire to marry her jazz and R&B roots. A masterful version of Bill Evans' "Blue in Green" from Miles Davis's Kind of Blue, featuring a deeply sensitive reading of Coltrane's opening choruses on the original by Taeko, rendering Carn's vocalese lyrics with mezzo forte swoops that descend into pianissimo breathiness, is followed by her arrangement of the classic "What A Wonderful World," in a Brazilian rhythm that will leave you smiling in a land of wonder.

Here's what you say about
Taeko Fukao - Wonderland.