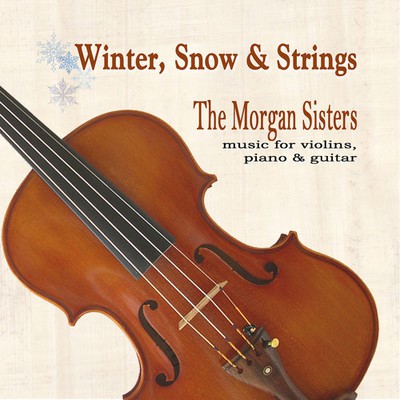 'Winter, Snow & Strings' is a warm, uplifting musical experience for the Holiday Season, featuring violin and vocal performances by the Morgan Sisters. They are accompanied on most tracks by piano and on the rest by guitar. The sweet, buttery tones of Michele's 1824 French violin stand out beautifully on the solo lines above the deep, rich sound of Melanie's 1684 Dutch instrument on the harmonies and countermelodies. Together in every aspect of their musical expression, the two sisters create the effect on the ear of one violin with eight strings and one heart with two voices. David Vito Gregoli's imaginative contemporary arrangements give a new, dynamic feel to the well known sacred melodies. This unconventional reworking of traditional Holiday fare appeals equally to the listener that is comforted by the familiar and the one that delights in new and exciting musical adventures. This CD ranges from meditative and inspiring to upbeat and energizing, and is always thoroughly delightful! Artist Bio: The Morgan Sisters received most of their musical training in Boston and began performing professionally as children, individually and along with an elder sister as the Morgan Sisters Trio. They have been members of various orchestral groups in the Greater Boston and Los Angeles areas. Their career has taken them from smaller venues, such as churches, synagogues & schools to much larger one's, such as UCLA's Royce Hall, the Dorothy Chandler Pavilion and Boston's Symphony Hall. Since relocating to Los Angeles, where Michele-the younger of the two-continued her training at USC, they have spent two decades working together in small ensembles, performing classical, traditional, and original music. Artists' Statement: 'Working on 'Winter, Snow & Strings' has been a wonderful musical adventure for two Jewish girls! Every winter, when we were children, we lit the menorah and sang 'Dreidle, Dreidle, Dreidle.' Our only exposure to Christmas music was through television and films, and most of that was popular music written by Jewish songwriters! It was always a treat for us to hear some of the more familiar carols, but though our musical little ears thrilled to the beautiful melodies and transcendent harmonies, alas it was not a part of our own cultural experience. The vast world of sacred church music was one we would only begin to explore as teenage music history students. Now, many years later, it has been our great pleasure to perform and record some of this exquisite musical literature. For us, nothing is more inspiring than music written to celebrate the Divine Presence in our lives. Whatever the religious path may be, the feeling is the same: awe, gratitude and love. Happy Holidays!' -Michele & Melanie Morgan Produced by David Vito Gregoli.

Here's what you say about
Morgan Sisters - Winter Snow & Strings.