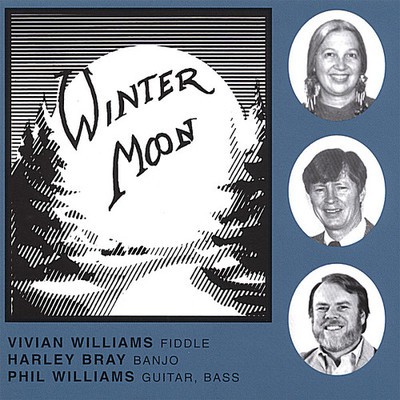 Vivian Williams, Harley Bray, and Phil Williams have been performing traditional music for over four decades. Vivian, besides being a noted Pacific Northwest dance, old-time, and bluegrass fiddler, has won many fiddle contests and written many fiddle tunes. Harley Bray played banjo with 'The Bray Brothers,' an early 1960's bluegrass band based in Illinois who received national acclaim for their recordings and appearances on the Grand Ole Opry and Bill Monroe's bluegrass shows. Phil is known for his dynamic guitar backup. This CD features fourteen original fiddle tunes in old-time style written by Vivian, including 'Chicken Under the Washtub,' which was recorded by the Del McCoury band and has become a bluegrass jam standard in many parts of the country. Vivian Williams' 'Winter Moon' offers the listener a delightful collection of mainly self-penned numbers. Assisted and complimented here by Phil Williams (guitar and bass) and Harley Bray (banjo), Ms. Williams gives us fourteen of her own compositions, five traditional pieces and two tunes from other composers. Williams and company have taken great care with these recordings. The ensemble works smoothly and effortless together with Phil Williams and Bray giving Williams tasteful support to her fiddle playing. One can hear and feel the pure pleasure these musicians must receive from playing fine tunes well. All of the 'T's' - taste, tone, time, technique, touch - abound. Students of traditional music, American tunes and bluegrass as a melodic style will find 'Winter Moon' a thoroughly engaging listening experience. Highly recommended. (Bluegrass Unlimited) This is another album that came out early and then defied all comers to top it. It may be a paradox to call it 'new' old-time music, but Vivian Williams' original fiddle tunes are an important addition to the repertory, and Harley Bray's lyrical banjo-picking supports them admirably. [Selected by this reviewer as one of 'the very best recordings, to be found anywhere, of 1990'.](The Trenton Times)

Here's what you say about
Vivian Williams - Winter Moon.