Lauren Pomerantz - Wings of Time - the Sephardic Legacy of Multi-Cult 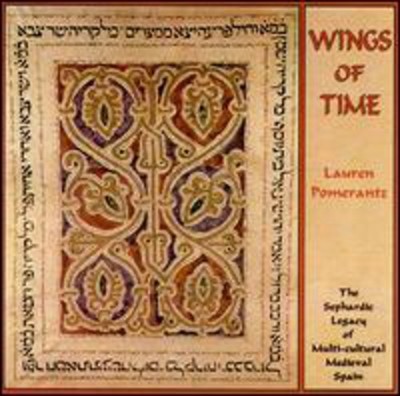 Spot on beautiful vocals by Lauren Pomerantz and masterful playing of medieval instruments create powerful and moving Early Music from ancient Spain. Sung in Ladino (pre-1942 Spanish) these melodies of the Sephardim (Jews who lived in Medieval Spain) of romance and intrigue are soulful and will touch your heart. Accompanying herself on an adapted dulcimer, recorders and psaltry by Kit Higginson (early music flutes and harp), rebec and vielle by Shira Kammen (early music's violin and viola), and Peter Maund's percussion are the perfect sound tapestry for these 18 selections. This CD truly offers Sephardic music played at it's best. Moving from passionately lively, to touching ballad, these songs awaken the knowledge that love, romance, spiritual aspiration and heart ache are universal and cross all boundaries of time and culture. Also hear well known biblical stories handed down from the Sephardic oral tradition. There are strikingly beautiful Hebrew poems from Medieval Spain put to Sephardic melodies by Ms. Pomerantz. Press Reviews of Wings of Time: 'Exotic and exuberant' New York Times 'Extraordinary emotional intensity and musical precision.' The Boston Phoenix 'Performances are virtuoso and infectious in the extreme, with perfect ensemble, intonation and wonderfully artistic rhythmic sensibility.' In Tune Magazine 'Think of it as world music from another century, and you'll begin to understand it's enormous appeal.' San Francisco Weekly 'She sings a collection of treasures from the Sephardim..Add these songs to your treasure chest - they sparkle.' Napra Trade Journal 'One cannot exaggerate the magical, exotically beautiful flow of the melodic lines...to anyone remotely interested in Early Music, Wings of Time amounts to an essential acquisition.' In Tune Magazine 'There is a special flavor, midway between East and West, in the songs of the Sephardim, sung with compelling tone and exquisite style by Lauren Pomerantz..extraordinary music.' The Washington Post Artist biography: Lauren Pomerantz is a graduate of Oberlin Conservatory of Music, and later received a MA for her Early Music work overseas in Spain and Switzerland at the Schola Cantorum Basiliensis. Living overseas on an island off the coast of Spain for almost 9 years, she lived in close communion with the earth and the indigenous people of the land. There in Spain, her musical life was reawakened when she discovered the Golden Age of Spain which heralded in Jewish, Arab and Christian cultures in collaboration and exultation. The Sephardim, when expelled from Spain in 1492, carried with them, through oral tradition, these appealing songs of Life and Love.

Here's what you say about
Lauren Pomerantz - Wings of Time - the Sephardic Legacy of Multi-Cult.