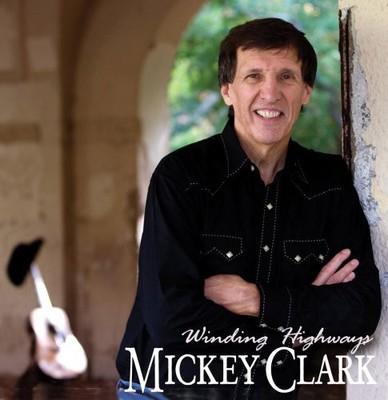 A Louisville, Kentucky native who's been equally at home in the vibrant music scenes of Nashville, Chicago and New York over several hardworking decades, the singer-songwriter Mickey Clark has written songs for the likes of Jerry Lee Lewis, The Oak Ridge Boys, and many others during years of working at Nashville hit factories like Glaser Brothers and Combine Music. Finally, after decades of the kind of dues-paying that grinds many a performer into the dust, Clark is finally getting a chance to present his own songs in his own way. A popular folk festival performer whose talents have been acclaimed by Bob Dylan and Leo Kottke, Clark enlisted the willing help of his pals Robin and Linda Williams, John Prine, Sam Bush, Jerry Jeff Walker, Kinky Friedman, Tim Krekel, Turley Richards and others for his new ear X-tacy label recording, Winding Highways. Acclaimed producer Jim Rooney was impressed enough with the songs and the heartfelt authenticity of Clark's delivery to take on the project, a 14-song collection of primarily original songs with a few select covers of country-folk craftsmen like Utah Phillips and Michael Burton. Standout tracks include "Don't Piss On My Boots," Where the Green River Flows," "Wendigo," and "Louise."

Here's what you say about
Mickey Clark - Winding Highways.