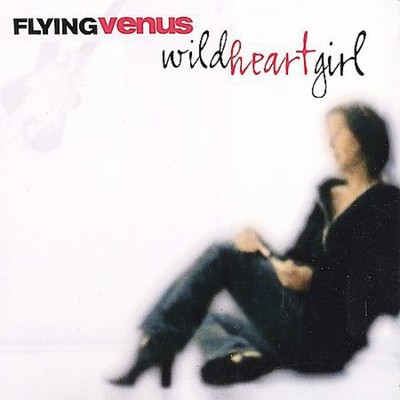 Ok - now that the reviews are starting to pour in, Jean Mazzei and Flying Venus could very well be 'the newest pop band least likely to succeed.' Underdog amongst the underdogs, people either love or hate this music. Ear to the ground radio fans who are suppose to be 'in the know' haven't been quite sure how to categorize Mazzei's music. Reviews range from people who say they are 'songs that won't get out or your head' and 'elegant vocal stylings' all the way to the other side with comments about the banality of the lyrics to delusions of deep thinking. Hmmm. What's a writer to do? Hence, Jean Mazzei and Flying Venus have released the CD 'Wild Heart Girl' to an unsuspecting world. Often compared to Blondie, the B-52's, and the Pretenders, FV's sugary pop with an edge or 'attitude pop' has catchy hooks with grooves ranging from power-pop to punk. This diverse collection of songs reflects Jean's unique take on life, relationships, and pop culture. Mazzei's quirky lyrics tempt the palate of anyone who has loved the wrong person and knew it... made up her mind, then changed it... wanted it all, but gave it away... Followers of Flying Venus call Jean's music catchy, empowering, meaty... Some may call it delusional... and others will say it's because 'she's a g-g-g-g-girl...' Designed to make you think, dance, laugh and feel, Jean's songs are easy to approach yet continue to give upon repeated listening. ABOUT JEAN MAZZEI - LEAD SINGER, SONGWRITER, INSTIGATOR Jean Mazzei writes what she knows, and after many years of regular naval gazing, she discovered that, yes, the only thing there is lint. Her hooky melodies, sharp wit, and quirky lyrics relentlessly address themes like pop culture and growing older in her distinctive tongue-in-cheek manner. 'I love how you tell it like it is! It's as if you were inside my head!' says Dani Marcus, San Francisco resident and fan. Jean Mazzei and her band, Flying Venus, have appeared throughout the greater Bay Area,and at a few LA dives, sharing bills with Grammy winner Bonnie Hayes and the Super Bonbons in her 'Girlz Who Rock' series, as well as Grammy nominated Carlos Guitarlos. A stickler when it comes to musical quality and programming, she often books the entire evening, showcasing high quality local bands, making for a diverse, yet cohesive night of great, well-executed original music. 'It's about the whole experience. If someone is going to come out and pay money to hear original music, they need to be glad they didn't sit at home and watch TV for free.' Jean Mazzei makes sure the audience gets more than they bargained for. Flying Venus has a sound reminiscent of the Pretenders, Blondie, the GoGos, B52s and the Doors, her sound is eclectic and full - 'attitude pop' if you will. Along with pop radio, her deepest influences were in folk - especially Peter Paul and Mary, classical music, jazz and musical theater. Later, she got turned on to the Rolling Stones, Neil Young, and Joni Mitchell. Today she is a fan of Aimee Mann, Liz Phair, Radiohead, TS Elliot and ee cummings. She also has a secret love of stadium rock and cheesy mystery best sellers, but that's another story. ABOUT JOHN MAZZEI - KEYS, ARRANGING, GREAT SEX John Mazzei started as a vocalist when his rendition of 'O Holy Night' brought down the house. Then his voice changed and he discovered the piano. From there he started playing in bands at age 12, and proceeded to attend the 'Holiday Inn School of Music' where he toured with top 40 cover bands for decades. He is also an accomplished jazzman, and brings an extensive wealth of musical know-how to the table. His smokin' solos which contain influences from rock legends, laced with Herbie Hancock, are distinctively John Mazzei. If that's not enough, his studio skills as a producer/engineer/arranger come in extremely handy. An avid gear hound, he is constantly upgrading and improving their studio, Palace View Studios, so named because of it's view of a world famous venue, The Cow Palace, in San Francisco. John is married to the lead singer.

Here's what you say about
Flying Venus - Wild Heart Girl.