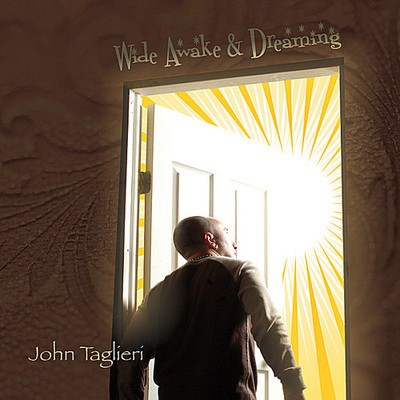 "You're Life's The Only Starring Role You Get To Play", and that's how a career gets built...by believing in what you do and chasing your dreams. John Taglieri is no stranger to chasing dreams and making a career and has been doing so the old fashioned way. With the upcoming release of his fourth CD, Wide Awake & Dreaming (4/07 Leap Dog Music), along with a DVD This Was NOW, Taglieri has realized all the dreams one could hope for. A full time touring career, solid CD sales, a growing fan base, his own record label and publishing company, and much, much more. Building things one step at a time has been his way, and he has stepped right into something good. Part troubadour, part showman, Taglieri has made a name for himself through energetic and emotional live shows showcasing his catchy songwriting and powerful voice. His latest offering illustrates the growth and depth of his writing, and shows an artist that is comfortable in his own skin and place in his career. His songs capture the listener's imagination and make them feel as if he were singing to them, with a positive attitude so sorely missing in music today. Catchy, familiar, honest and welcoming, his songs draw you in and have you singing along after just one listen. Spending time on the road as a solo acoustic, a duo, trio, and full band, he has brought many facets of himself to the table. Picking up a guitar at age five was the first step for John Taglieri, and he hasn't looked back since. He has been playing and recording music professionally since the age of 15. He has released independent albums with past groups, toured on local, regional, and national levels, and received airplay from many local radio stations. Music is a way of life to him. He has shared bills with some of the most famous players out there and has played some of the best venues in his home area. He has been a lead guitarist, lead vocalist/frontman, drummer, percussionist, bassist and keyboard player. His vocal talent has been used in every project he has ever been involved in, be it as a lead or background vocalist. His ability to play many instruments has insured that he has kept busy at all times. With three independent albums to his credit, John has made a solid name on the indie circuit, constantly touring and playing relentlessly. His tenacious attitude has garnered him considerable press. With all the media have come sponsorships from the likes of Ovation Guitars, Marshall Amplification and Curt Mangan Strings. His first solo CD, Leap Of Faith was a true labor of love for Taglieri. The diverse blend of songs on the CD has made John's sound accessible to many people, from many genres. With one "Male Pop CD of the Year" win already, and also a runner up for "Rock Album Of The Year" nod, as well as being chosen as a "Top 20" in many polls, there seems to be no delay to the tremendous momentum. His second CD, Half & Half helped to garner him the "UIMA Pop/Rock Artist Of The Year" award, with more press and bigger shows following along. Opening for more national acts, gaining exposure and fans, the momentum continued to build. His third release, NOW, kept that momentum going with more touring and more positive reviews. Having shared the stage regularly with acts such as Rik Emmett, Edwin McCain, The Gin Blossoms, Gavin DeGraw, Sister Hazel, and many other top name acts, Taglieri is becoming an in demand performer. Ever growing as a writer, his new material is full of straight up rootsy Americana pop/rock n' roll. His new songs speak to the listeners from a place that talks about what life is all about. His knack for story telling and pulling the listener into the song is increasing and is helping to build a solid fan base. With a solid foundation and fantastic new material, it seems that the consistent upwards climb is going to continue. What does the future hold for John Taglieri? Only time will tell, but so far, thing are going in one direction...upwards!

Here's what you say about
John Taglieri - Wide Awake & Dreaming.