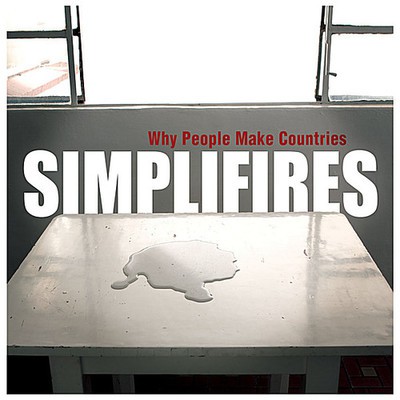 Simplifires was born in 2005 in Mexico City when Shine (el Guitarro del Amor), Rodrigo and Alex (the Solorzano cousins) asked daveO to join them from London (where he, Shine and Rodrigo originally met) and complete a formation they knew had to exist...Shine on guitar, Rodrigo on bass, Alex at the drums, and daveO singing. The one Irish then made the trip all the eay over the Atlantic Ocean to meet the three mexicans. It was March 11th, 2006. Simplifires quickly set about recording a debut EP: Simple. It was an instant success, especially within the vibrant indie-rock scene in Mexico City, it generated a lot of radio airplay and attention in the independent media and some much larger publications. Their vibrant and energetic performances have lifted the different cities in Mexico and has led them to share the stage alongside several international bands, including Ratatat at the end of 2007. Late last year 2007 the group began the recording of their debut album 'WHY PEOPLE MAKE COUNTRIES'with the help of people like Paco Ayala (bassist from Mexico's smash hit rock band Molotov), Phil Vinall (production credits: Radiohead, Placebo, Blur, Zoé, Elastika, among others) and Hans Mues (renowned producer and musician). Final mastering was undertaken in Canada by Harris Newman, whose credits include The Arcade Fire. "... Simplifires has the potency and vertigo to make a party of any stadium..." ROLLING STONE MAGAZINE MEXICO, Mar'07 '...why are there not more bands like this one? Why People Make Countries is an album debut launch by a band who deserve to reach the great stages...4.5/5STARS' SONIKA MAGAZINE Album review APRIL 2008 "... The best suggestion comes from Simplifires, relentless forward-driving agressiveness, catchy guitar licks, an engaging Irish front-man and enough melody to hit home without sapping it up..." THE MIAMI HERALD Mar'07 "A gulp of the rock that we are missing...sufficient intensity to get any stadium on it's feet...one of the best bands around..." SONIKA Magazine/Mexico Nov'07 "A musical connection that sees no frontiers and an understanding that defies nationalities is what the band Simplifires is living..." REFORMA (Newspaper/Mexico) 13/06/07.

Here's what you say about
Simplifires - Why People Make Countries.