Amanda Richards - Richards, Amanda : Who Has Your Heart 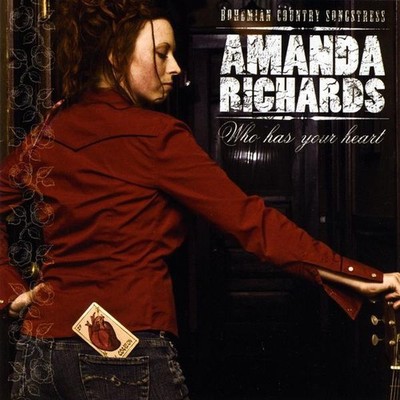 On a sunny California ranch, a freckled young girl sings the catchy chorus she'd come up with while riding the trail. For Amanda Richards, it's a perfectly natural thing for a six-year-old to do - after all, it's in the blood. Her country musician Dad often brings her onstage. Two aunts are country musicians. And Grandpa sang tenor in the legendary Sons of the Pioneers. It would almost be hard for her not to write and sing. Fast-forward to a teenage Amanda hitchhiking across Oregon. She's taught herself to play guitar, busking for cash while crafting songs that blend her country/folk heritage with bohemian spirit. A handful of coffeehouses and impromptu sidewalk gigs lead to the music program at Mt. Hood Community College, which she attends off and on. More traveling troubadour than student, Amanda frequently treks back to the childhood ranch - often earning bus fare by singing for other passengers. By 21 she's released her first album, Not Always Sexy. It's a little bit country, a little bit rock, and full of memorable, radio-ready hooks. Her vulnerable yet empowered vocals have begun to take on a sultry quality beyond her years. Songs like Cookies and Whiskey are turning into rowdy sing-a-longs at her shows. Her follow-up, Live at Mississippi Studios, captures a sold-out show featuring Amanda's voice and guitar accompanied only by cello. In this setting, her delivery is more intimate, her stories of broken relationships more poignant. A record release party at Portland's Aladdin Theater finds her playing to her largest crowd to date. Afterward, like any gypsy troubadour would do, she heads to the Caribbean for a few months of sun and songwriting. Returning home, Amanda and her band win a trip to Austin for the finals of Famecast, a national battle of the bands, where they place 3rd. Bigger Oregon gigs follow, ranging from solo acoustic sets to full band shows, including a stop at Nike World Headquarters to play for The Lance Armstrong Foundation's LIVESTRONG Challenge. Between shows, Amanda and the boys hole up in the recording studio. This time around, acoustic and electric guitars, drums and upright bass are rounded out with cello, weeping pedal steel guitars and swirling organ, creating the most diverse blend of bohemian country she's laid down to date. The results can be heard on Feb. 20th, 2009 when Amanda returns to Portland's Aladdin Theater to debut her new CD, Who Has Your Heart.

Here's what you say about
Amanda Richards - Richards, Amanda : Who Has Your Heart.