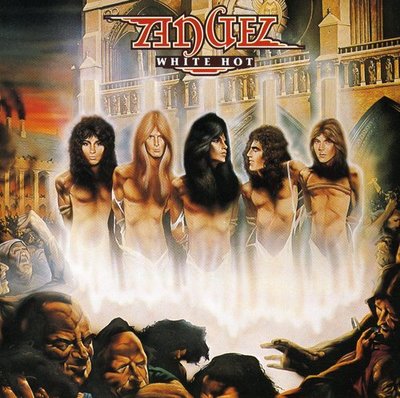 Angel: Gregg Giuffria (mini-Moog synthesizer); Barry Brandt (electronic percussion); Punky Meadows, Frank DiMino, Felix Robinson. Personnel: Barry Brant (vocals, drums); Frank DiMino (vocals, background vocals); Punky Meadows (guitar, acoustic guitar); Edwin Meadows (guitar); Gregg Giuffria (keyboards, synthesizer); Barry Brandt (synthesizer, drums, percussion, background vocals); Felix Robinson (bass guitar, 6-string bass, background vocals); California Boys Choir (background vocals). Recording information: REcord Plant, L. A. , CA; Studio C, Los Angeles, CA; The Record Plant, Studio C, Los Angeles, CA. Photographer: Barry Levine. Arrangers: Edward Leonetti; Angel. In the 1970s, Angel epitomized the type of commercial rockers who were hated by rock journalists but adored by their fans. When White Hot came out in 1977, critics wondered why anyone would spend money on Angel's ultra-slick, formulaic pop-metal, hard rock and arena rock when the punk and new wave explosions were giving us such challenging, cutting-edge risk-takers as the Clash, Elvis Costello and the Talking Heads. Truth be told, rock can and should accommodate a variety of approaches - in 1977, there was room for those who challenged and provoked and those who, like Angel, simply entertained. White Hot, Angel's best selling album, isn't the least bit challenging, but then it isn't supposed to be. Angel was unapologetically commercial, and high-gloss numbers such as "Over and Over," "Stick Like Glue," and "Hold Me, Squeeze Me" point to the fact that the East Coast band was generally good at what it did. Also likable is Angel's cover of "Ain't Gonna Eat Out My Heart Anymore," which became a moderate hit. As far as pop-metal goes, Angel didn't quite have the hooks of Kiss, Sweet, or Cheap Trick; but while White Hot isn't fantastic, it's decent. If you want to hear one of the 1970s bands that helped pave the way for Bon Jovi, Winger, Warrant, and numerous other MTV-friendly hair bands that were huge in the 1980s, White Hot is worth a listen. - Alex Henderson.

Here's what you say about
Angel - White Hot.