Willy Claflin - Where Were You in 72? 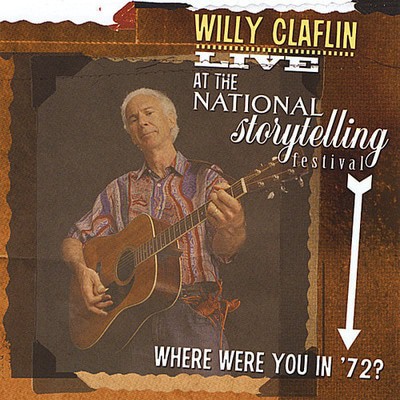 Willy Claflin Willy Claflin grew up in New Hampshire and spent his introverted childhood day dreaming and wandering through the woods, listening to his father\'s bedtime stories, and worrying about the wolf under his bed. During high school he extroverted himself into a guitar-playing rock and roll singer. He also learned hundreds of folk songs. Studying American and French Literature at Harvard University, Willy made time for performing music and comedy in the Boston-Cambridge folk music scene. He was known for \'kicking the stuffing out of museum pieces\' (Boston Phoenix). He spent a year abroad in Paris, then a post-graduate year in Scotland, where he joined the Edinburgh Folk Song Society and collected a cappella ballads. By the late 1960\'s, Willy had turned to teaching and discovered his talent for creative curriculum design. As a classroom teacher during the 1970\'s, he developed his major puppet characters: Maynard Moose, Boring Beaver, Socklops, and Gorf (Master Flyswatter Percussionist). Willy returned to performing in the 1980\'s, bringing a wealth of stories and puppet monologues to his repertoire of traditional and original songs. In 1981, he was invited to the Hawaii House of Representatives to present a storytelling program. The House honored him with a Special Resolution for his contributions to family entertainment. Since 1982 Willy has continued to write and collect stories as he criss-crosses the country, Maine to Hawaii, as a storytelling performer and teacher. Since moving to San Francisco in 1984, Willy has released nine recordings, many of them national award winners: Stones Along the Shore was first. (Just re-released as a CD in 2004.) August House\'s Maynard Moose Tales and Willy Claflin and Friends followed in 1986. Bones of Love (1987), an album of folk rock originals, was featured as a Recommended Release in Billboard Magazine. The August House work Maynard Moose: Sleeping Beastly & Other Tales (1992) was picked by the American Library Association as a Notable Children\'s Recording, as well as chosen for a Parents\' Choice Classic Award. The Wolf Under the Bed (1996), another August House release, won both the Parents\' Choice Gold and the ALA Notable Children\'s Recording Awards. Willy\'s fourth August House effort, The Uglified Ducky (2002) merited a second Parents\' Choice Gold as well as a Storytelling World Award. In 2003, Willy released Where Were You in \'72? - Live from the National Storytelling Festival, which also won a Storytelling World Award. In 2001, Willy added the International School in Jakarta, Indonesia to his storyteller residencies. That fall, he was a headliner at the National Storytelling Festival in Jonesborough, Tennessee, where he has returned as a featured teller in 2002 and 2004. Recently, he was at the International Storytelling Festival in Cape Clear, Ireland. Willy has been featured at dozens of regional storytelling festivals and hundreds of schools, libraries, and concert venues. Students of his from every corner have become teachers and storytellers perpetuating Willy\'s love of story and invention. See all titles by Willy Claflin. Awards 1. Sleeping Beastly (CD) Parents\' Choice Award (Classic Title) 2. Sleeping Beastly (CD) ALA Notable Children\'s Recording 3. Uglified Ducky (CD) Parents\' Choice Award (Gold Title) 4. Uglified Ducky (CD) Storytelling World Award 5. Wolf Under the Bed (CD) ALA Notable Children\'s Recording 6. Uglified Ducky (CD) NAPPA Gold Award (Storytelling)

Here's what you say about
Willy Claflin - Where Were You in 72?.