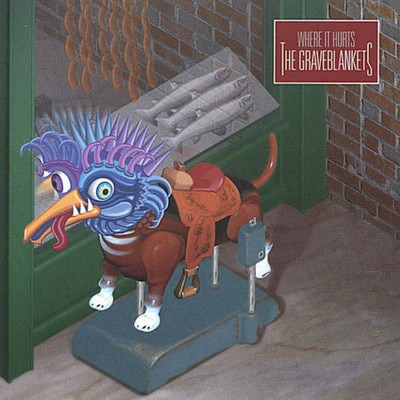 Volume 9, Issue 55 July/August 2001 - Performing Songwriter Magazine The Graveblankets Where It Hurts Produced by Chris Arduser & Steve Keller ----- Review by Noel Murray Erstwhile Adrian Belew sideman Chris Arduser has been living in Cincinnati for the past decade, alternating his time as a member of Belew's power-pop outfit The Bears with his own side projects, The Graveblankets and psychodots. The former combo has had the most success, self-releasing four CDs since 1995. The tracks, laid down by The Graveblankets in Nashville while shopping for a major-label deal, have seen the light of day as Where It Hurts, a charming, intelligent set of folk-based pop-rock. Mandolin and violin lend color and shape to warm mid-to-uptempo ballads like 'You're Gonna Wish' and 'Less Blue,' while the same instruments add exoticism to wordless tunes like 'The Innocent Spouse' and 'The Glazebucket' and weight to driving rockers like 'Safety Net.' But the personality of The Graveblankets is best expressed in the story song 'The Papercuts,' about a fictional rock band that fades from public view. 'Why did they stop making records?' Arduser half-moans on the chorus. If there's a special spark to The Graveblankets' performance on that song, it may be because that's a question that Arduser himself hopes his fans won't have to ask. All Music Guide The Graveblankets Where It Hurts ----- BY STEPHEN HOWELL Rated 4 and a half stars (4 is Good, 5 is Excellent) You have to love a band that beats you about the head in a happy pop-rock way. Songwriter/singer/guitarist Chris Arduser manages to write serious and tongue-in-cheek lyrics that tend to be dark, yet the music is upbeat and catchy. A tune like 'Candy' has a good hook and a bass solo that breaks away from any previous notion of what's supposed to be included in a pop song. Arduser even goes as far as giving the violins of Pete Hyrka and Karen Addie some room on the Celtic-inflected 'The Glazebucket' and 'The Innocent Spouse.' Mandolin is also in hand for the R.E.M.-flavored 'Gods and Monsters' and the strange psychedelics of 'Death Ranch.' When the album ends, you're left with a clean, glistening feeling of rock that refreshes. November 30-December 6, 2000 - The Cincinnati CityBeat 'Hurts' So Good ----- BY MIKE BREEN Cincinnati's Pop/Folk/Rock heroes The Graveblankets have unleashed another spectacular display of addictive melodies and sublime playing. The group's latest album, Where It Hurts, focuses on singer Chris Arduser's crafty songwriting and features singers and musicians who have played off and on with the band over the past few years. The album kicks off with the title track, an instantly memorable Pop song that will likely get major airplay on WNKU and like-minded stations everywhere. But nearly every song here has that kind of potential. Arduser - a once/current/future member of Pop/Rock greats psychodots and The Bears - has a very instinctive writing mind, knowing how to shape songs to reveal their fullest melodic impact but also never slacking on the ornamentation. In previous bands it may have seemed that Arduser was relegated to George Harrison status, but The Graveblankets' albums have more than demonstrated wh at a writing talent Arduser is in his own right. Where It Hurts shows him at his peak. Other track highlights include the lilting 'Knoxville Girl,' the ode to being deeply, insanely touched by music, 'The Papercuts,' and the sweet Pop confection of 'Candy.' Former bandmate Bridget Otto also turns in a dazzling lead vocal performance on 'Less Blue,' and the band shows their capricious side on the snippet 'The Innocent Spouse,' which sounds like the soundtrack to a very short foreign film, and 'The Glazebucket,' a rowdy and fairly authentic slice of Irish jigging. Friday, December 1, 2000 - The Cincinnati Enquirer Graveblankets at top Local band closes out year with it's best recording ----- BY LARRY NAGER Rated 4 stars (4 is Excellent!) With just a few weeks left in the year, the Graveblankets deliver what may be the best local CD of 2000. Smart, but not smirky-clever, lyrics combine with a richly textured blend of rock, folk and pop to create a distinctive band sound. There are echoes of the Beatles and Beach Boys in the sweet harmonies of the title cut; the Byrds in 'You're Gonna Wish'; and of Brit folk-rock demi-god Richard Thompson in several songs, including the instrumental 'The Glazebucket' (as well as in leader/songwriter/drummer/guitarist Chris Arduser's taste for dark subjects). But instead of being just a bunch of disparate influences, it all finally comes together on Where It Hurts, the band's best disc to date. Mr. Arduser empowers 'Knoxville Girl,' transforming her from the traditional murder ballad victim into a dangerous desperado. 'The Papercuts' is a bouncy pop homage to a favorite band ('When you heard them you could feel the stars'). 'Gods and Monsters' brings the devil into the cast of characters, while 'Candy' is a pulsing rocker about a stormy relationship ('If only your smile would not melt away'). 'The Innocent Spouse' briefly indulges Mr. Arduser's love of world music in a tongue-in-cheek Latin/Middle Eastern quasi-tango. Former 'blanket Bridget Otto returns to shine on the lead vocal spot for the Cranberries-flavored pop gem 'Less Blue.' Mr. Arduser let's his morbid streak take over on 'Death Ranch,' with it's jaunty opening line, 'Fatten me up, I'm ready for the death ranch.' 'You're Gonna Wish' closes the 11-song set with chiming guitars and another beautifully sung chorus in a song that shows the Graveblankets to be the equal of the Jayhawks, Golden Smog, Wilco or just about every other band in contemporary roots rock. Do not miss this one.

Here's what you say about
Graveblankets - Where It Hurts.