Scott Andrew & Walkingbirds - Where I've Been 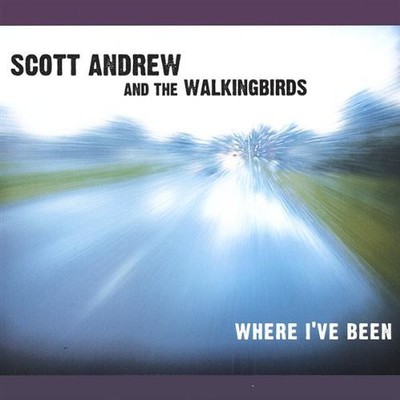 ** THIS CD ALSO CONTAINS 8 BONUS MP3 TRACKS! ** Scott Andrew delivers scruffy, DIY acoustic pop with self-effacing wit and underdog bravado. He thinks you're pretty cool. For fans of: Guster, Josh Rouse, Matt Nathanson, Pete Yorn, Ari Hest, Glen Phillips. This Enhanced CD also contains the lost Walkingbirds album 'The Sandalwood Sessions' in MP3 format, plus bonus tracks, artwork and more! --- PEOPLE SAY: 'This is very very good. If you enjoy a Guster-esque, Pete Yorn type of song, this is on!' -- 15MegsOfFame.com 'Scott's definitely among the top ten artists we've seen on the road this year.' -- Brian Austin Whitney, Just Plain Folks 'There is no chance you'll mistake Scott for a folksinger. His poppy, energetic strokes and clever phrases inspire bobbing heads and thoughtful smiles.' -- The Weekly Volcano 'Great stuff, luminious, sweet intelligent folk without being self-important or slight. 'Gravel Road Requiem' reminds me of when I first heard Matt Nathanson nearly eight years ago who quickly became my favorite folkie ever.' -- Kevin Smokler, author 'The hook of this song made me stop and think and really wonder how a song can be written so well.' -- Eamon Dee on In Harm's Way @ Garageband.com 'I was hooked from the first note...A+' -- P.B. on In Harm's Way @ Garageband.com ''Cast the Net Wide,' sounding ever so Celtic, a gentle folky number turns partly rock via one of the few occurances of electric guitar. I think I'll take this one home with me.' -- Joel Canfield, KnowYourMusic.com 'A real treat as far as mellow, acoustic folk house music goes. A relaxed style that somehow reminds me a little of David Gray. I give the album four stars.' -- Chris Lea 'I was out, in what felt like the middle of nowhere, driving back to I-5 when 'Gravel Road Requiem' came on. I reached down, bumped the volume up to 21 or 22, and shivered. It was as if a music video was being created before my eyes. I was so engrossed in the sights, sounds, and feel of everything that I missed my turn. When the song ended I realized that I was driving away from my destination. And I didn't care.' -- Adam Gessaman, idly.org.

Here's what you say about
Scott Andrew & Walkingbirds - Where I've Been.

1) Gravel Road Requiem
2) The Big Lie That Solves Everything
3) Brickyard Bend
4) Cast the Net Wide
5) 2 A.M
6) Everything They Say