Arthur "Ace" Enders - When I Hit the Ground 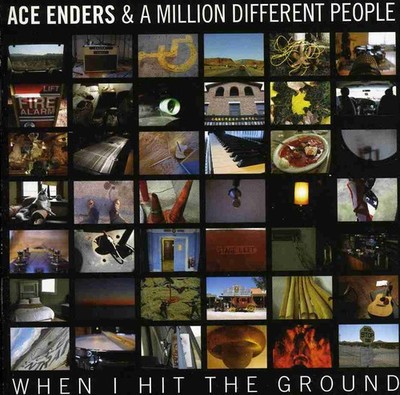 Being a seminal and iconic figure at such young an age is a hefty burden for Ace Enders who fronted the influential and important rock band the Early November. At 26 years of age, Ace led his band through three well-received albums (FOR ALL OF THIS, THE ROOM IS TOO COLD, and the controversial triple disc THE MOTHER THE MECHANIC THE PATH) before deciding it was time for him to branch off for a solo project. With nearly 500,000 records sold to date, the band went their separate ways in the summer of 2007. Following his own muse, Ace continued writing, producing and creating... and in early 2008, he released THE SECRET WARS. This solidified Aces credibility as a songwriter while racking up overwhelming download statistics, proving once and for all that he's influence on modern rock music is still not only viable but commercial as well. In December 2008, Ace and longtime producer and friend Chris Badami assembled Ace Enders and a Million Different People - a veritable who's who in the new rock starfield including Mark Hoppus, Matt Thiessen (Relient K), Kenny Vasoli (Starting Line), Craig Owens (Chiodos), Alex Gaskarth (All Time Low), Aaron Marsh (Copeland), Duane F. Okun (Socratic), and Bryce Avery (the Rocket Summer). The final product of their work, titled When I Hit the Ground, is filled with bright, melodic and complex songs that appeal to old Early November fans and new Ace Enders fans equally. With a full year of touring planned across the US to support the release, WHEN I HIT THE GROUND is sure to add another feather in Ace Enders ever-evolving cap.

Here's what you say about
Arthur "Ace" Enders - When I Hit the Ground.