Don Emerson - Whatever It Takes 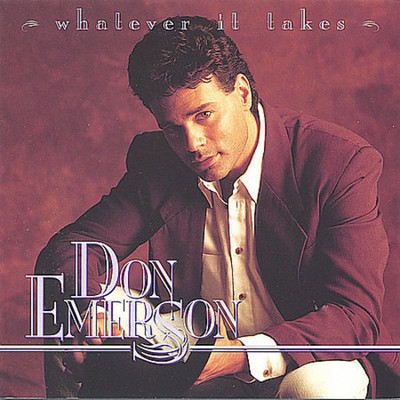 Don was raised in Fruitland, Washington, a small farming and logging community which is 60 miles north-west of Spokane, Washington. He is the great-great nephew of Ralph Waldo Emerson. He believes that this art of writing is living on through God's gifts. Along with this, the positive influence of my family and friends. In high shcool Don played the clarinet, trombone, drums and guitar, and lead his my first band. As a senior, operated his own recording studio, built on the family farm. Produced his first first album. He performed in numerous weddings, concerts, conventions and clubs. In 1986, he met and married, Nancy, who is also talented in the Arts and is a true inspiration for me. For our wedding, we wrote our own vows in the form of a song: 'Through Life'. Since then, it has been used in countless weddings. One being, the wedding of Michael Landon's son. Eventually, it became the theme song for my album: Through Life. Don and Nancy took their music to Asia through the USO Tours and returned to the States to become House Act for the Showboat and The Vegas Rio Hotel in Las Vegas. It was there that they recorded 'Through Life' in hotel rooms between gigs. He worked with Universal Studios, Hallmark Records, PYP Records and RPEM-FM in Spain where the Through Life album received 'Best of 1995.'

Here's what you say about
Don Emerson - Whatever It Takes.