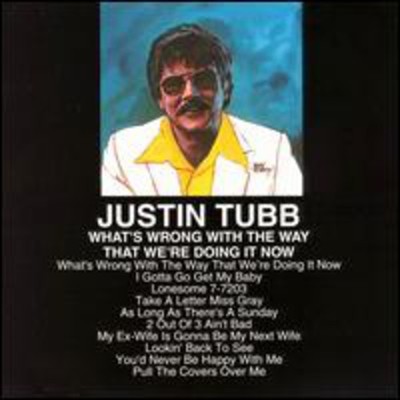 A fixture on the Grand Ole Opry, singer/songwriter Justin Tubb, the eldest son of the legendary Ernest Tubb, had a style all his own; but for one duet version of 'Blue Eyed Elaine' on Ernest's 1979 album The Legend and the Legacy, he always recorded independently of his famous father. Justin was born in San Antonio, Texas and spent most of his life in the Lone Star State with his mother Elaine, who separated from Ernest in 1948. He got his professional start in local clubs during college, and eventually moved to Nashville. At his father's suggestion, Tubb got a job working as a DJ in Gallatin, Tennessee, where he occasionally performed some of the songs he had written, and made his recording debut in 1953 with 'Ooh-La-La.' Throughout the 1950s, Tubb recorded steadily, but had only moderate success with his solo efforts. He did a little better singing novelty duets with Goldie Hill; in 1954, they reached the Top Five with their version of Jim Ed and Maxine Brown's 'Looking Back to See,' followed by the Top 15 'Sure Fire Kisses.' In 1955 he joined the Opry, and in 1956 he had his first solo success with the Top Ten hit 'I Gotta Go Get My Baby.' Tubb signed to Starday in the early '60s, released a few albums, and toured so much that he was temporarily dropped from the Opry for not appearing often enough. After 1963, he signed with RCA and released two duets with Lorene Mann, including 'We've Gone Too Far Again.' He had one more minor hit with 'But Wait There's More,' his last chart appearance. He continued to record, tour, and appear on the Opry through the '70s. He also continued to write songs, and his 'Lonesome 7-7203' was a number one hit for Hawkshaw Hawkins, while 'Be Glad' became a major hit for Del Reeves. Additionally, his 'What's Wrong with the Way We're Doing It Now' became a popular song with fans of the traditional country sound. Tubb also wrote and recorded songs paying tribute to his father, including 'Thanks, Troubadour, Thanks' and 'Just You and Me, Daddy.' In 1981 Justin Tubb signed with First Generation Records where he released the album 'What's Wrong With the Way We're Doing It Now' under the production of Nashville Legend Pete Drake.

Here's what you say about
Justin Tubb - Justin Tubb.