Geodesium - West of the Galaxy 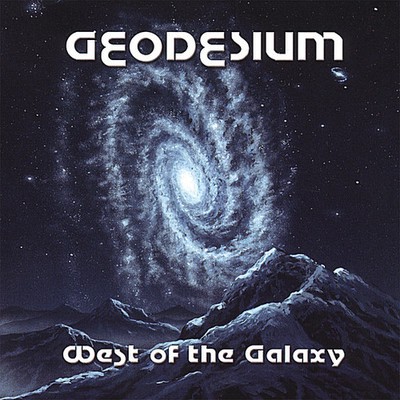 GEODESIUM (pronounced Gee-oh-dee-zee-um) A blending of the words 'geodesic dome' and 'planetarium' describing the environment which gave birth to the space music of Mark C. Petersen. Mark is unquestionably the most prolific composer for the medium, and the GEODESIUM name has become synonymous with planetarium music. Since 1978, more than 800 planetaria around the world have purchased Mark's original planetarium music for their shows, and GEODESIUM albums are popular items in planetarium gift shops. Mark uses Emulator and synthesizer sounds, blended in a rich, varied collection of original instrumental works. Relaxing yet provocative, GEODESIUM stylings embody 'traditional' space music -- that ethereal, beautifully floating music that characterizes the genre -- as well as 'new age'-style works and up-tempo, rhythmic sonic odysseys. 'West Of The Galaxy' contains nine selections -- just under an hour of original music -- recorded from 1983 to 1987. This album firmly establishes the space-music style and signature GEODESIUM sound. Airplay on radio shows such as 'Music From The Hearts Of Space', 'Music From The Global Village', 'Musical Starstreams', 'Echoes', and 'Heartbeats' brought widespread interest and acclaim, as listeners around the world were introduced to Mark's music. Digital samplers and polyphonic synthesizers (not invented at the time of the previous albums!) bring a more modern, polished and sophisticated element to the nine all-original compositions featured on the album. Floating, ethereal selections mingle with up-tempo romps and dramatic anthems. =================================================== REVIEWERS HAD THIS TO SAY: West of the Galaxy is as vital and richly enjoyable a recording of space music as ever. Mark Petersen (aka Geodesium) makes music that wears very well and this CD shows that fact to good effect. The CD opens with 'The Grand Tour' and it's slowly pulsing bass notes and shimmering synths. This is followed by a hyper-space cruiser, 'Zephyr,' with whooshing effects, wonderfully done plucked-harp synths, and ferocious drum pads. These two cuts exemplify the duality of 'West of the Galaxy', i.e., the presence of deep space drifts and high velocity cruisers. Not many musicians that I know of are as comfortable with both styles as Mark is. Jonn Serrie comes to mind, but Mark does not use the same long synth washes, instead concentrating more on notes and chords. Interestingly, Mark and Jonn are two of the premier composers of music for planetariums. That should certainly tell you something about the mood Mark's music conveys. You'll hear this in 'The Ocean of Space' with it's gently rotating melodies, 'Sky Flight' with percolating rhythms and breezy synth flute, or the sixteen-minute title cut, a wonderful visit to deep space with slow bass rhythms, languid synth bass flutes, and shimmering synth effects. Despite this recording's release date of 1987, I don't know if you will find much better space music being recorded today. 'West of the Galaxy' is not dark or mysterious, but warm and friendly. For lovers of more melodic (but not neo-romantic) and cheerful space music, I recommend it highly.' -- Bill Binkelman, Wind and Wire ----------------------------------- 'This is true 'space music'; Mark Petersen is a well known writer of music for planetaria around the world. But it generally stays light and energetic throughout. 'The Grand Tour' calls us into the universe with rolling harp-like chords and delicate rhythmic plucked bass. 'Zephyr' is upbeat in tone with fast drums and a joyful melody, and suggests comets swinging around the solar system. Many songs are repetitive variations on a theme. 'Lightwaves' pictures pulses of energy with a steady snare drum beat and an almost choral quality in places. 'Probe' has a slower evocative quality with a slightly syncopated drum beat. 'West of the Galaxy' is the headliner, sixteen minutes long. It's call and response between bell-like music and a light airy sound is followed by a bass drone. The music fills and ebbs, but always the dance remains. In 'Winter's Return', the cold wind blows, suggestive of the seasonal change. There is the barest dissonant quality of decay. A fluttering in the background evokes a vision of birds headed south. This album feels well choreographed, as if to take us on a journey and then return us home. The sense of quiet energy makes it fine for drifting off or creative work.' -- Heartsong Review ----------------------------------- 'As a planetarium composer, Mark Petersen has been exploring his medium for nearly ten years and developing his own unique brand of space music. The title track, 'West of the Galaxy,' is the centerpiece of the album at just over 16 minutes, with a steady, undulating feel that borders on a Vollenweider-esque magic, as the gentle journey encounters minor turbulence, suggested by an occasional meteor shower or asteroid field. The other eight tracks show an appealing variety, ranging from the uptempo 'Zephyr' and 'Sky Flight' with it's flute melodies, to the rippling harp-like arpeggios of 'The Ocean of Space,' complete with repetitive synth washes over choral chords. Throughout the journey there are many side trips and experiences of touching down on some beneficent new planet or distant space vistas looming ever closer as we soar through the heavens.' -- Heartbeats ===================================================.

Here's what you say about
Geodesium - West of the Galaxy.