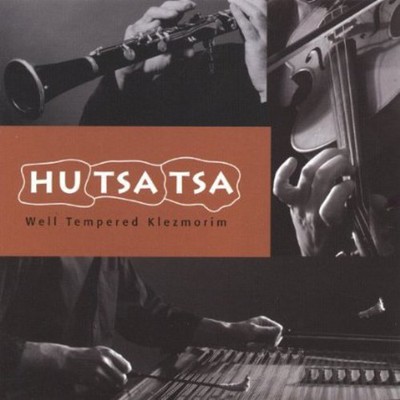 One of Toronto's foremost klezmer bands, Hu Tsa Tsa is known for their authentic and intimate sound. Drawing on their diverse backgrounds spanning everything from jazz and classical to rock and popular music, the members of the group animate their strong traditional sound with a modern sensibility, guiding old music into new realms while preserving each song's essence. Elegant arrangements, passionate improvisation, group interplay and subtle dynamics characterize the group's distinctive approach to klezmer music. In addition to community events (weddings, bar mitzvahs, fund-raisers), Hu Tsa Tsa also specializes in the lesser-known, non-dance repertoire of klezmer 'listening' music. Band members include band founder Jonno Lightstone on clarinet and flute; Eric Stein, on mandolin, cimbalom, and piano; and violin virtuoso Rona Goldensher, a specialist in classical and Baroque early music. ----------------- QUOTES 'Four Stars' Rick Phillips 'Sound Advice', CBC Radio ----------------- 'Well Tempered Klezmorim' is the first CD of a unique voice in the Klezmer world. Karen Ages 'Wholenote ' magazine, Toronto, Canada ----------------- 'You don't know from klezmer till you've heard...' Robert Everett-Green 'The Globe and Mail' Toronto, Canada ----------------- ...'impressive and inspiring... well informed and deeply studied. ...they amplify the essential elements of klezmer music without resorting to cliché or mere novelty.' Kurt Bjorling of 'Brave Old World' and 'The Chigago Klezmer Ensemble' ----------------- '...classically informed, beautiful klezmer with roots in European Jewish music traditions that precede the brassiness and jazz overtones introduced when klezmer came to this continent...a very wonderful album.' Ari Davidow 'The Klezmer Shack' ----------------- ' HU TSA TSA Well Tempered Klezmorim (independent) Rating NNNN' Critic's Pick, NNNN = Sizzling Elizabeth Bromstein 'Now Magazine' ----------------- REVIEWED IN 'THE KLEZMER SHACK' BY ARI DAVIDOW When I first met Jonno Lightstone nearly ten years ago, his Toronto-based klezmer band was brassy, loud, and lots of fun. The band had a regular gig at each of the bi-annual Ashkenaz festivals, and it has been exciting to hear how the band has changed as people moved in and out, then kept shifting trying to find a sound that fit the musicians. The current band, finally captured on CD, is perhaps my favorite of a long line of excellent lineups. The biggest influence may be the inclusion of mandolin/tsimbl player Eric Stein, whose band; 'Beyond the Pale' is a wonderful post-klezmer world accoustic music tour de force. Coupled with Jonno's excellent clarinet and new violinist Rona Goldensher this recording builds on recent recordings by bands such as Khevrisa and Budowitz to create a sort of klezmer chamber music ensemble. Indeed, the result is classically informed, beautiful klezmer with roots in European Jewish music traditions that precede the brassiness and jazz overtones introduced when klezmer came to this continent. In their hands, the 'Gasn nign' for instance, becomes less a tune for escorting wedding guests in the street than a quiet melodic piece with gentle violin, clarinet, and tismbl developing the klezmer melodies as chamber melodies of an earlier era. There is intriguing self-referentialism, of course, in that this is not klezmer as it was, but rather a new adaptation of klezmer in the spirit of the songs that would have been played to wealthier clients hundreds of years ago-as modern return to traditions that are long lost, but here, recreated in a modern context, resulting in something far more true to pre-North American klezmer in sound and spirit than one usually hears. The two suites that form the main body of the CD are tremendous fun. The Moscowitz Suite does, in fact, provide a lively excursion through the music of legendary klezmer tsimbalist Joseph Moskowitz. The Musiker Medley, pulling in material from the last great klezmer album produced before the klezmer revival is an intriguingly good take on what we know recognize as an incredible fusion of klezmer and jazz and americanisms. The album closes with a lovely original composition by Eric Stein, and a delightfully energetic, very traditional rendition of Brandwein's 'der Heisser', here called more generically, 'Tatar Tants'. It is a great closing to a very wonderful album. Reviewed by Ari Davidow, 9/12/04 ----------------- REVIEW IN 'WHOLENOTE' MAGAZINE, FEB.1 - MAR.7 2005 'Well Tempered Klezmorim' is the first CD of a unique voice in the Klezmer world. This genre of Eastern European Jewish folk music has enjoyed a tremendous revival in North America the last couple of decades, with new bands springing up everywhere. Usually characterized by a lively, raucous, gypsy-like quality, Klezmer music was the traditional entertainment at Jewish weddings and other celebratory events, performed by traveling Klezmorim. Toronto based Hu Tsa Tsa (Rona Goldensher, violin, Jonno Lightstone, clarinet and Eric Stein, cimbalom, mandocello & piano) present Klezmer in a gentler vein. Mostly arrangements of traditional tunes, the flavour of this recording is introspective rather than extroverted, that of intimate chamber music, which the trio delivers with delicate sensitivity. The violin and clarinet are typical for this genre, but the use of cimbalom (a type of hammer dulcimer) and mandocello lends an atypical 'magical' air to this recording. The arrangements are well informed, based on collections of ethnomusicologist Moshe Beregovsky, and recordings from the 1920s of famed clarinetist Naftule Brandwein and cimbalom player Joseph Moskowitz, but with Hu Tsa Tsa's unique stamp. The liner notes give excellent background information on each selection. A nice addition to any Klezmer enthusiast's collection. Karen Ages.