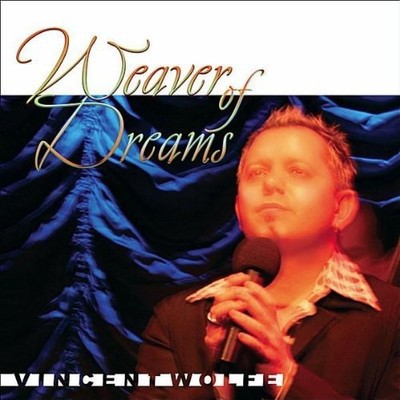 The wait is over for fans of Toronto-based jazz crooner Vincent Wolfe with the release of Weaver of Dreams: an elegant, evocative blend of classic jazz and pop tunes, lesser-known gems and an original ballad, released on Wolfe's own V-Jazz label. The new CD features Vincent Wolfe's dreamy and pensive vocals framed by a quartet of top-flight Canadian jazz players Sean Bray (guitar), Louis Simao (bass), Lina Allemano (trumpet) and Barry Romberg (drums). Weaver of Dreams is a welcome return for Wolfe and a highly anticipated one for fans of his velvety tenor - a voice that -has been described as "somewhere between Chet Baker and Mel Torme" by Manhattan Transfer founding member Laurel Masse. The selections on this disc are gentle, romantic, swinging, melancholic and slightly eclectic. And this comes as no surprise to Wolfe's many devotees, who have long been captivated by his far-reaching repertoire. Wolfe's swoon-worthy vocals captivate from the get-go with the sparkling title track Weaver of Dreams: a light, swinging reprise of Nat Cole's 1951 hit. He then brings a contemporary jazz-blues feel to James Taylor's Don't Let Me Be Lonely Tonight and reinvents the Sondheim classic Send in the Clowns with a plaintive, soaring vocal in a decidedly folk-blues setting. That same feel is echoed in the haunting ballad Divided, written by Wolfe and guitarist Bray. Tenderly is one of the romantic highlights of this new disc. Wolfe's interpretation of this Sarah Vaughan classic is an enchantingly intimate affair that makes the listener feel like they're hearing the lyrics for the very first time. Like the 11 other tracks on this disc, Tenderly showcases Vincent Wolfe's up-close-and-personal approach to each song. The Toronto native then jumps effortlessly from the lilting, playful bossa nova groove of Jobim's Dreamer (sung in both Portuguese and English) to the moody, film noir-ish feel of Cry Me a River followed by the jaunty swing of East of the Sun, Indian Summer, and the seldom-heard Someone's Rocking My Dreamboat. Vincent wraps up his musical journey with a lilting ballad version of Stars Fell on Alabama - a nod to Billie Holiday's classic 1957 recording. The project also includes a playful version of I've Got My Love to Keep Me Warm (a 1959 classic for Dean Martin) just in time for the Holidays and previously available only as an online promotional track. Originally intended as a follow-up to Until Tomorrow, Wolfe's acclaimed sophomore release dating back to 2001, Weaver of Dreams went through several incarnations and projected release dates on various labels before ultimately being shelved. Then in 2007, the digital source tracks were lost, but a recently discovered master disc was found and the original project rescued. Now, vocal jazz fans have a reason to rejoice with the release of Weaver of Dreams - a disc that allows music-lovers to rediscover the soulful, swinging and romantic style of Vincent Wolfe. "Vincent's...tone and style lie somewhere between Chet Baker and Mel Tormé...a wonderful place to be." - LAUREL MASSÉ (Manhattan Transfer) "There's a kind of intimate quality to his voice. An honesty that is really remarkable and mellifluous...and rich." ROBERT ENRIGHT - GLOBE & MAIL 'Wolfe's voice is a sweet, reverberating tenor perfect for his material...Conveys both serenity and strong emotion, knowing just when to lay back and when to pour it on...' - CADENCE MAGAZINE WEAVER OF DREAMS (cat no. VJ 1010) © 2010 V-Jazz Records Recorded at Umbrella Sound & Vyner Road Studios in Toronto, Canada. Produced by Vincent Wolfe Playing Time: 49:21 PERSONNEL: Vincent Wolfe (vocals) Sean Bray (electric & acoustic guitars) Louis Simao (acoustic bass) Lina Allemano (trumpet) Barry Romberg (drums & percussion).

Here's what you say about
Vincent Wolfe - Weaver of Dreams.