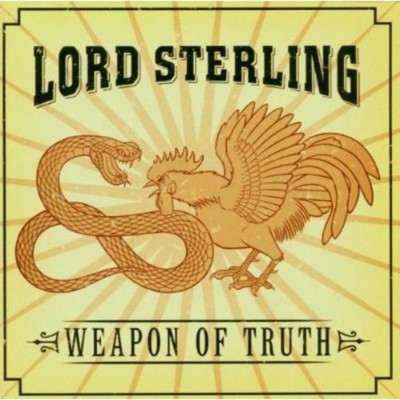 Weapon of Truth- 11 songs constructed to take the listener through flowing worlds of static confusion and visceral truth. A holy tabernacle of amplification erecting sonic alters where songs are not only heard but also felt. Traditional blues progressions are gutted and fused with non-traditional fury, exposing the raw nerve of their design. These are not the meanderings of sub-models strumming away to produce a retro sound to match their British explosion haircuts. These are the sounds of kingdoms collapsing, these are the songs of those ready to explode. This is a hard and loud musical cleansing. Drawing influences anywhere from Blind Willie Johnson to Black Flag, Lord Sterling have written the soundtrack for the new millennium. Weapon of Truth is an album that took close to a year to make and will send some heading for the hills while others will rejoice in all it's glory. 'This comes highly recommended to anyone disillusioned with the endless stream of Kyuss/Sabbath clones clogging up a once vital scene' James Sherr - 4 K review from Kerrang Dec. 2002 Stoner Rock Chick.com review Reviewed by: Nick Muc What's interesting about Lord Sterling is their complete and utter originality. Hailing from the mighty New Jersey scene that spawned Monstermagnet and all it's brethren, I was half expecting some sort of doom southern space blues guitar thing. This is definitely not the case with this debut record for Rubric Records 'Weapon Of Truth' - a disc that has completely Caught me off guard with it's disturbing, dream-like melodies, it's thought provoking lyrics and it's fresh improvised punk/rock and roll flair. 'Weapon Of Truth' starts off the disc immediately setting themselves aside from the stoner rock tag, sounding as if they had more in common with Iggy than Ozzy. The punk influences can be found in abundance here, although Lord Sterling doesn't beat you over the head with them. The tasteful and subtle nods to the MC5 and Rollins-era Black Flag combined with some progressive Tool-like song structures has this one constantly growing on me. Check out 'Blues on Mars', a moody track with some of the busiest bass lines I've heard in a long while. It also has a real improvised feel with Mike Schweigert (formerly of Daisycutter) laying down some beauty guitar work. No that's not Henry Rollins on vocals, although at times Bink Ryan is a dead ringer for him. Take for instance 'Dead In Orbit', a slowish trippy jam that has Bink matching Rollins' authoritative shout/whisper vocal delivery, and the band busting out their musical chops with a vengeance. 'Earthling' is a flat out rocker from the start, and probably the most conventional Lord Sterling gets on this. In fact, the whoosh-y riffs here are standard Jersey scene (like some of the stuff off the Gallery Of Mites disc) made even heavier by the superb Trax East production values. 'No More Identity' is my favorite track on 'Weapon Of Truth'. It's one of those tracks that had me reeling the way I was upon hearing the fury of Faith No More's Angel Dust for the first time. It starts out with a weirdo bass and guitar riff that quickly morphs into one of the most disgusting riffs in recent memory. I'm not sure if there are any other tangible comparisons I can make for this one, let's just say that you will know what I mean when you hear it. You will not hear any bullshit 'yeahs' or 'baby's' anywhere on this disc, except of course on their scathing cover of MC5's 'Black To Comm'. But what you will hear are some creepy, challenging vocals by Bink Ryan, most notably on the 'Song Of Sinking Ships' and 'Too High for a Fool'. This is a quality, provocative effort by Lord Sterling that will have you rocking and scratching your head in amazement at the same time. Review from The First Church Of Holy Rock & Roll: Weapon of Truth Lord Sterling: Weapon of Truth East Coast heavy action. They got a growling singer, they got power riffs (love that production), they got strange ideas (a 'Space Trilogy,' a Howlin' Wolf quote, improv and sound effects), they got dynamics, they got a jaundiced view. For me, it wasn't quite enough--but I'm glad I stuck with it to the end, Ocause (speaking of weird ideas) they also cover the MC5's 'Black to Comm,' not the most obvious nor the wisest choice one could make, and I fucking LOVE it. Better, I do not lie, than any MC5 recording I?ve ever heard, and it would find a place instantly on my 'Top 25' cuts of the year. So let's say they have serious potential. Weapon of Truth Review - Static Void Magazine: Ewww! Something I can really sink my ears into! How nice! The Weapon of Truth from Lord Sterling is almost exactly an hour of darkly melodic music with a recipie of 1/4 Embrace, 1/8 Fugazi and 1/8 Radiohead. Do you know math? In case you don't I'll help you, because I have a calculator handy. That ads up to... um... a little more or less than 1/2. Where does the rest of the sound come from? I don't know, it is something original and unique. You will hear lots of Pink Floyd / Radiohead effects, and gorgeous live Cello. The lyrics are as fascinating as the music. Good stuff. I suggest you enjoy it. It's kinda like old DC Hardcore meets Radiohead meets Stoner Rock. You really should hear it yourself and write your own review of it. It's good music to listen to whilst chilling out. I keep it in my car and not on my shelf.

Here's what you say about
Lord Sterling - Weapon of Truth.