Idaho - We Were Young and Needed The Money 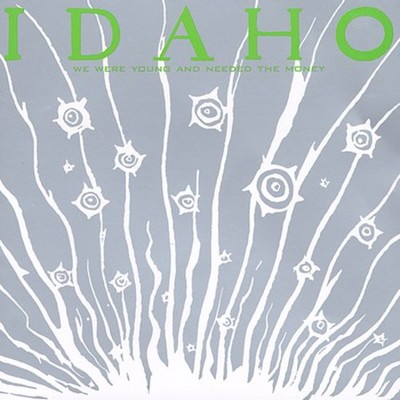 Idaho We Were Young and Needed the Money (Idaho Music/Retro-phonic) Throughout their ten-year existence, Idaho have recorded songs ranging stylistically from slow dirges to near-ambient mood pieces, occasionally spitting out noisy rock anthems in between. This last category has been the least frequently explored, a puzzling fact since it would seem to be the most commercially palatable. With We Were Young and Needed the Money, singer/songwriter Jeff Martin has collected seventeen previously unreleased tracks recorded with his various lineups that surprisingly is the first work to fully explore Idaho's potential as a rock band. Don't expect any rare B-sides or E.P. tracks: each of these 17 songs appear on disc for the first time here, Martin having deemed them inappropriate for inclusion on each of his six proper studio albums. Hardcore fans may be familiar with standout cuts like 'Shoulderback,' 'This Day,' and 'Spiral,' which have previously been circulated as Mp3's thanks to the band's website. These tracks represent Idaho at their most accessible without sacrificing anything in regards to emotion or quality, and are surrounded here by numerous cuts of equal worth. The disc begins somewhat tentatively with the short, poppy 'Social Studies' before tearing headlong into a first half comprised of brilliant fuzzed-out rock. Allowing strong hooks to coexist with subtle guitar innovation, Idaho prove themselves one of the few rock bands of the past decade to successfully mix aggression and melody without being embarrassingly ham-fisted. Much credit goes to the Three Sheets to the Wind-era lineup (circa 1995), which found Martin backed by Dan Seta on guitar, Terry Borden on bass, and Mark Lewis on drums. All four musicians aided the composition of tracks like 'Teeth Marks' and 'Flat Top,' adding a muscular core that only accentuates Martin's unique vocals and prickly guitar style. The second half of the disc showcases the slow, quiet side of Idaho's sound. These tunes are more in line with the majority of the band's previously released work, and they prove equally as strong (if less revealing) than the first several tracks. The last three songs were recorded in 1992 and feature the original lineup of Martin and guitarist/drummer John Berry, who now heads up the Idaho Music/Retro-phonic label and is part of Martin's live band. The gem of these is 'Drown,' a devastating mixture of optimism and dread not heard since 'Forever,' the epic coda to This Way Out (1994). Far from being a slipshod odds'n'sods collection for fans only, 'We Were Young...' may actually be the best introduction to the emotionally dense world of Idaho that a curious listener could want. -Ryan Orvis Devil in the Woods ROLLING STONE: Rarities albums are usually reserved for major-label acts looking for a shortcut out of a contract. For Idaho this release marks a more sanguine occasion -- despite countless lineup changes and bum deals, the Los Angeles band has made the ten-year mark. So out of the vaults come tumbling seventeen B-sides and studio castoffs, thoughtfully arranged to flow like the proper follow-up to last year's haunting Levitate. It's not difficult to see why bleak dirges such as 'Come Over' were locked up until now, yet this set also carries some moments of genuine inspiration: vast melodic vistas burn through the layers of feedback on 'Shoulder Back,' while singer Jeff Martin's malaise breathlessly courses through the winning 'Social Studies.' But the uninitiated need not apply; this set is designed squarely for those already familiar with Idaho's transformation from a perpetually hung over sad-core outfit to astonishingly accomplished purveyors of emotional indie rock. For those who have stuck by the band, it's the ultimate anniversary present. AIDIN VAZIRI (September 3, 2002) RS.

Here's what you say about
Idaho - We Were Young and Needed The Money.