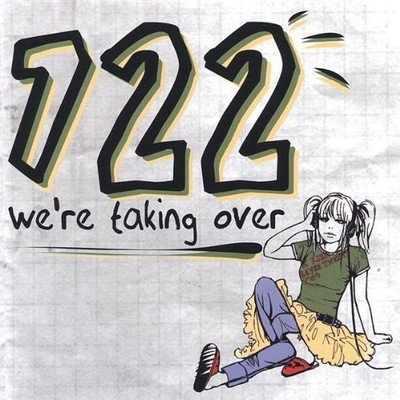 'From their Fantomas-meets-No Doubt sound to their silly, sweet lyrics, you'd be right to call Philly band 722's aesthetic fresh.' (5/14/05) - A.D. Amorosi, Philadelphia City Paper 'Art Rock Philly foursome use quirky pop vocals with dramatic edges to charm their sharp witted musical delivery.' (6/05/05) - Scott Frost Trentonian Imagine if a theater cast and a rock band joined forces. Well that's exactly what 722 does. 722 just released their second full length album, 'We're Taking Over' and has been continually branching out of their hometown of Philadelphia. This May, the band travelled to China to perform 21 shows at the Shanghai Century Park Music Festival. The band has appeared on TLC's 'a Dating Story', has been played on WUSR & WKDU in Philly, and past performance highlights include: sold-out shows at The World Café Live and the Fire, opening up for El Vez on 15th St., appearances at The Yards Brewery, NBNW, the Khyber, and a bi-monthly gig at Fergie's Pub. 722's uninhibited sound is both articulate and rugged. Davy Raphaely's infectiously catchy bass lines and animate voice, Mike Pietrusko's potent and incisive drumming, Nero Catalano's suave guitar work and honest vocals, topped with Sarah Linebarger's lucid voice generate the sound of 722. The lyrics are bluntly original exploring the details of everyday life and how people relate to each other. The band has been said to be a cross between Frank Zappa and Tenacious D with a twist 80s new wave like the Police and the Talkning Heads but this is only a glimpse of their influences. Members of the band have worked with such diverse Philly projects as Saigon Slim, Bebek, Sensi Star, and the Paul Green School of Rock. The band's eclectic sound is augmented by the theatricality of their stage presence. 722 has combined the theatre aesthetic with music since the band's genesis at the Philadelphia Fringe Festival where Nero and Davy presented riffs from household jams. As the number of gritty songs like 'Parasite' grew, so did their popularity as a seasoned house party band. Everyone met in college where they all attended the University of the Arts. The band's larger than life personalities combined with camaraderie invites the audience into 722, their home. Everyday the band is getting closer to their artistic goal of communicating to the audience the atmosphere of a play within each song. 722, no category confines them.