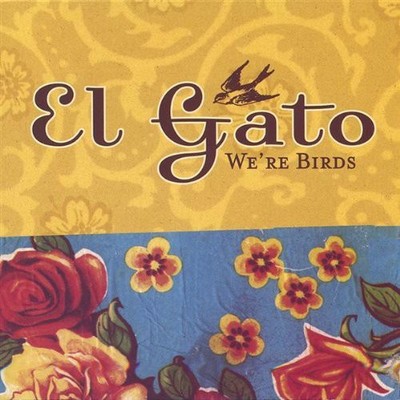 Texas based quartet El Gato released it's first full-length album, 'We're Birds' in the US in the summer of 2002. It was released in Europe in the summer of 2003 through Cargo UK. Mark Pirro, bassist for The Polyphonic Spree & Tripping Daisy, produced We're Birds. With an orchestral blend of layered guitars, keyboards and vocals, El Gato's non-traditional approach to song writing and constant sonic experimentation has caught the attention of national media and music enthusiasts. For it's live performances, the quartet merges instruments, effects, vocal harmonies and a visual trip to pull-off the rich, multi-layered sounds found on the album. Fans of Modest Mouse, Polyphonic Spree, Wilco, Beatles, Grandaddy, Built To Spill, and The Flaming Lips will appreciate the pop diversity found on We're Birds. Having toured and played shows over the last two years with the likes of Jason Loewenstein (of Sebadoh), Goldenboy (Shon Sullivan - Elliott Smith, Eels, Neil Finn), Ash, J.Mascis and more, El Gato is currently working on the follow-up to We're Birds. El Gato has been recording at Satellite Park (Malibu, CA) with David McConnell (Elliott Smith, Wilco, Folk Implosion) and at BPL (Dallas, TX) with the Pipe's Brothers over the last six months. PRESS QUOTES: 'Charming and tunefully grandiose, this is music you can take home to mom - and get her looped with it.' - Alternative Press 'An ambitious full-length debut that soars, swoops and flies like the birds they profess to be, El Gato's We're Birds makes a strong case for Headphone Album Of The Year.' - CMJ New Music Report 'Don't take this statement lightly since the year has seen great albums from The Flaming Lips, Red Hot Chili Peppers, Spoon and Beck -- El Gato has released the best album of the year.' - The Daily University Star from SW Texas State University 'Timeless pop that will never sound old or dated. We're Birds is chocked up to the max with superb melodies and clever songwriting... The band presents no less than fourteen tracks, and each one is a keeper. There's a lot more depth here than we are accustomed to hearing in pop music. Smart, creative, hummable, and unique. Recommended.' - Baby Sue / LMNOP '...intelligent indie-rock in it's best form.' - The Daily Texan, University of Texas 'We're Birds is a breathless album, with the naiveté of a kid singing along with his favorite song and the confidence to pile an orchestra on top of the Marshall stacks, Rock and Pop written in capital letters on a billboard.' - Dallas Observer '...a stunning album, impressive in scope and even more so in execution and sense of both detail and overview. Fans of everyone from The Byrds to The Flaming Lips will find something of interest here.' - Ink 19 'This is one of the best records I've ever heard.' - Don Alcott WFSH fm (Rochester, NY)

Here's what you say about
El Gato - We're Birds.