Soviet - We Are Eyes, We Are Builders 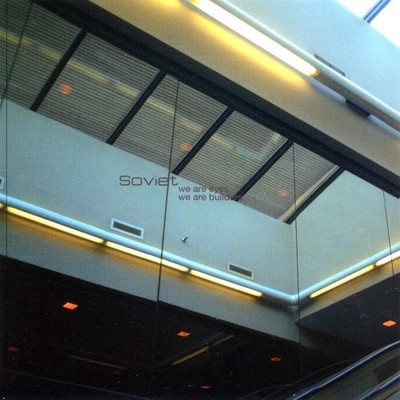 In early 2001, one of New York's finest new groups, Soviet, quietly released their debut album We Are Eyes, We Are Builders on an independent imprint (Head Records) The debut collection that fused the intense emotions of urban suburban youths with the sounds of the new computer culture, caught the attention of critics and music lovers around the world. NME magazine describes them as a five piece, new wave, electro pop collective that sounds like Roxy Music meets Suicide but more Duran Duran thrown in. VICE magazine places them at the number one slot in a guide of Electroclash artists raving Soviet is only like the hottest band and that they have become one of New York's best kept secrets. With a song on the Tech-pop compilation out on Ministry of Sound and the single 'Sheltered Life' produced and co-written by Soviet for Erland Oye's debut album out on Astralwerks, this down town favorite is destined to reach a whole new audience. Though the name Soviet surfaced in 1999, the bands singer and songwriter Keith Ruggiero had been experimenting with a 4-track in his Connecticut home since the mid-90s. Teaming up with collaborator and fellow band member Chris Otchy, the band began to take shape and the pair started performing at shows around the country. With overwhelming positive response, they set out to create a unit that could bring the sound of their debut to life in a live show. With the addition of new members Amanda, Kenan and Greg, their latest shows have been nothing short of electric. With the line-up complete, Soviet have moved their home to NYC, the city that has embraced them so enthusiastically. Appearing at the SynthCon festival in LA and the Electroclash festival in NYC, Soviet has played alongside heavyweights such as Peaches, Fischerspooner, the Faint, Khan, The Killers, Add N to X, Stereo Total and the A.R.E Weapons. Rave reviews of their live shows have appeared in publications such as Paper, NME, Vice, V, the Village Voice and the shows have attracted a who's who of the contemporary electronic music scene. Shows at Exit, Joes Pub, Luxx and appearances at the aforementioned festivals have placed this group sitting high and fly on industry hot sheets. The single Candy Girl has become a favorite on the critically acclaimed New York Electroclash compilation on Mogul Electro as well as the forthcoming Ministry compilation. Ultimately the buzz and industry hype isn't what drives this group to produce such beautiful modern music and explore the emotional stirrings of an emerging new generation. It's their contemporary language and sonic textures that keeps them from being just another retro new wave group. Copies of their cover of Yazoo's In My Room have already started making waves in the underground dance clubs in NYC and samples of the new material shows the promise of major label breakthroughs.

Here's what you say about
Soviet - We Are Eyes, We Are Builders.