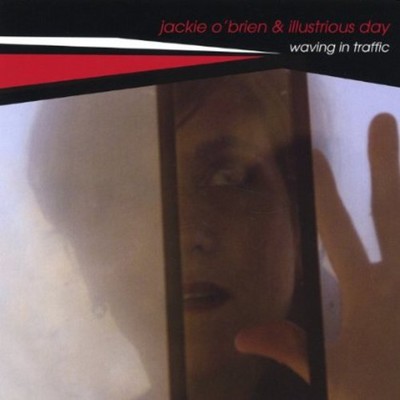 Intense acoustic rock driven by dynamic female vocals, haunting lyrics and unforgettable melodies are but a few words that describe the music of Illustrious Day, led by singer-songwriter Jackie O'Brien, bassist Jim O'brien and drummer Pete Abdou. Think Shawn Colvin meets the Foo Fighters. 'Waving in traffic ' highlights the unique and timeless style of Jackie's voice with songs that rumble with emotion. The title track is about perseverance despite ones self. 'Waving in traffic, playing with matches, I'm waiting out this disaster.' concedes the chorus. 'Bricks n mortar' sings an epiphany about not taking people in our lives for granted. 'Neon lights, under stars, God on a penny. Fenced around the pleasure zone, won't you let me in. Why won't you let me?' sings the opening lyric. O'brien explains, 'Everyone in the band comes from such different musical backgrounds. It's an eclectic mix that creates a real dynamic sound.' The Providence, RI-based Illustrious Day began creating a buzz in the regional music scene as their 2002 full-length debut CD, 'Dizzy fell down,' garnered glowing reviews and radio airplay throughout the region. Illustrious Day was voted one of the top ten best unsigned bands in the country by BUZZPLAY.com and are growing a strong fan base as they continue to perform at clubs, colleges and festivals throughout the Northeastern United States. Jackie also performs solo and has played such shows as the Atlantic Songwriters Festival in Sweet Briar, VA and the R.I.S.A. stage of the Newport Folk Festival whose main stage featured the Indigo Girls and Shawn Colvin. Jackie is a nominee for Best Female Vocalist in the Providence Phoenix Music Poll 2005. Jackie's Daygirl Music has recently licensed 11 songs that are featured in the independent film documentary 'Holy Water-gate,' which received the prestigious CINE Golden Eagle Award. The film has aired in Europe/Australia and began airing domestically in prime-time on the Showtime network in May 2005. Illustrious Day's sound blurs the distinction between intimate singer-songwriter and energetic rock band. Reviews: ' Jackie O'Brien and Illustrious Day's new CD, Waving in Traffic, features more of the group's signature tuneful pop, led by O'brien's breathy, sweet-sounding voice....' ------The Providence Journal '....hits the creative target.' ------The Providence Phoenix 'Intense chick rock.' -----95.5 WBRU Radio-Providence, RI 'Jackie's catchy tunes will stay with you long after the buzz has worn off.' ---On-Island Entertainment and Media 'Jackie's vocal melodies provide each tune with a point of emphasis, while playful guitar strumming gives her voice a soft place to land.' -----The Providence Phoenix.

Here's what you say about
Jackie O'Brien - Waving in Traffic.