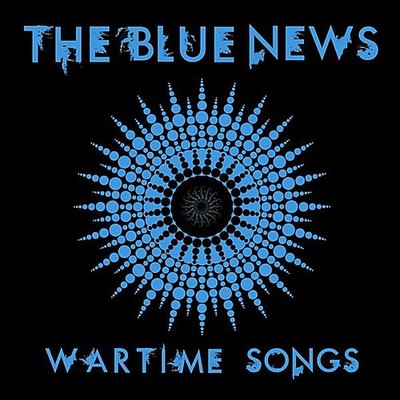 This EP is the band's greatest effort since their debut release in 2006. It's also the first time the band recorded with notable producers on their original music. The Blue News has been building a following with their unique original style which blends influences both old and new influences. Reviewers have compared the band's songs to everything from Blues mainstays like Bo Diddley, Greg Allman and Eric Clapton to Modern Blues-Rock bands such as North Mississippi Allstars and The Black Keys. Some of the most interesting comparisons have been Savoy Brown (which the band had never heard) and one reviewer said the group sounded like an 'Evil Elvis'. The band's new EP 'Wartime Songs' was recorded by legendary studio 'guru' Jim Devito, whose studio work over the years includes incredible artists such as Lynyrd Skynyrd, The Allman Brothers, Tom Petty, Don Henley and many more. The songs were recorded in February 2011 at Devito's private Retrophonics Recording Studios in St. Augustine, FL. The band's new songs were recorded to analog reel-to-reel using vintage instruments and amps dating back to the 1950s and then for a modern twist the songs were bounced to digital ProTools and mixed with legendary producer Sylvia Massy. Sylvia Massy worked with Rick Rubin in the 90s and her studio work includes several multi-platinum singles and albums by Tool, Red Hot Chili Peppers, Johnny Cash and many more. The band has remained unsigned, self-managed and self-released and has achieved five song placements on national TV, several song placements on regional cable stations, video game placements, three HD music videos and five studio albums and consistent touring in the Midwest US. Their second college radio campaign is set to begin in July/August 2011 and two songs from this album will be released on the video game Rock Band 3 in the summer of 2011. Album Review (OnlineRock.com): Hailing from the Midwest, The Blue News are quickly working their way up the ladder to success, with the same formula of artists like The Black Keys, My Morning Jacket, and even a simplistic, early White Stripes. The stripped down, gritty, in-your-face blues with a touch of honey in the softer parts are gaining The Blue News more popularity by the month. With the release of their newest EP Wartime Blues, The Blue News lay down the foundation for success in their sludgy riffs and raspy, crooning lyrics straight from the mold of classic blues masters. Two upbeat numbers start off the EP with a nice pace while the sludgy riffs catch hold of the listener. They cater to blues fans' craving for emotional and jagged riffs to go along with the solid percussion, which holds up the song structure and fills out it's edges nicely. 'Hypnotized' is arguably the best sounding and catchiest song on the EP as far as all around production goes; it sounds like something right out of the Black Keys catalogue, not that this is a bad thing or makes them unoriginal, because they give their own twist on each song. One notable quality is their ability to change the tone and pitch of the lyrical range from grungy and raspy to a clean croon with a touch of honey in each chorus. 'Hitman Blues' has a classic blues feel to it, medium-paced with just enough crunch between the guitar and drums to draw the listener in with a head bang, then turn around and send them shuffling to the dance floor. Also a notable plus found within the EP is the production value. While it's not Danger Mouse production (The Black Keys), the quality is surprisingly good for an EP by an up-and-coming band. Each element of the instrumentation is heard clearly and concisely, while the lyrics blend in nicely over the top, allowing the switch between rhythm guitar and solos to fill out the rest of the sound. 'Stay Gone for Good' and 'Be Yourself (And You'll Go Far)' round out this six song EP, which seems longer, but maybe that's just me. 'Stay Gone for Good' kicks into high gear right off the start and provides one of the faster paced songs on the album. Evening out for the verse, it kicks back into high gear for each chorus, folding neatly into a really nice riff, keeping the song driving toward it's apex. 'Be Yourself' is a friendly, acoustic track in the mold of Led Zeppelin III, which brings the EP to a soft close and rounds out a number of blues driven tracks with a laid back, comfortable number. The Blue News are clearly on the track toward great heights. Already, their songs are gaining steam and being played on TV shows as we speak. They are a refreshing blend of classic blues and rock with elegant song structures. Again, like The Black Keys and to some degree The White Stripes, The Blue News stick to the formula they know well, conjuring up enough gritty riffs and emotional tonal changes, all while containing that stripped down feeling to successfully drown the listener in the most classic form of the blues. Tim Rosini - Online Rock.

Here's what you say about
Blue News - Wartime Songs.