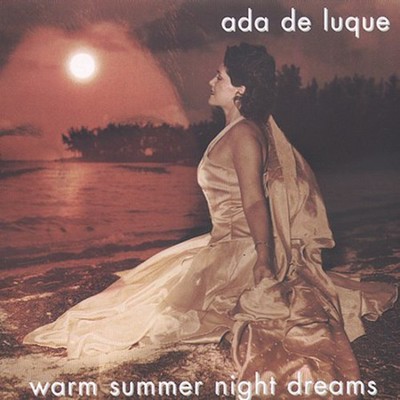 '...a voice of rich and velvety quality...bella voce...' (Luciano Pavarotti) '...a unique blend of smooth jazz, Latin/Caribbean, and classical music influences topped with Ada's beautiful, sultry voice makes 'Warm Summer Night Dreams' a most enjoyable cocktail' (B. Barouk, City Smart Magazine) Born in Cuba of Spanish origin, Ada de Luque 's love for music and singing started as a little girl, while listening and singing along with her parents and their friends as they performed classical boleros and Spanish songs accompanied by their guitars. When she was's five years old, her family moved to Miami. Without losing touch with her musical heritage, Ada was exposed to a broad spectrum of musical influences, from soul and rock-and- roll to jazz, blues and classical. It was her affinity and love towards classical music which eventually, at age 15, prompted her to start her classical vocal and musical training. After winning several competitions and awards for young opera singers, including a grant from the prestigious Florida Grand Opera (then the Miami Opera Guild), before the age of 20, Ada, following the advice of famed soprano Mirella Freni, moved to Italy to perfect her art at the Conservatorio di Musica di Bologna, under the direction of Maestro Leone Magiera. While at the conservatory, she participated in the International Luciano Pavarotti/Philadelphia Opera Competitions, which began her longtime friendship with the Pavarotti family, including private vocal coaching from the famed tenor himself. He once commented on the quality of her voice, saying, 'you have a beautiful voice with a rich velvety quality.' Shortly afterwards, Ada was performing in operas and concerts in both Italy and Germany, and was very well positioned to start joining the ranks of the opera divas - but fate had other plans. Visiting Miami during Christmas vacation, Ada's mother had a severe accident, and Ada was faced with taking care of her. Interrupting her career and staying in Miami to care for her mother actually opened up a new realm of experience for Ada. She became the lead star at the best night club in town at that time, Les Violins Supper Club, garnering rave reviews for both her vocal style and showmanship. The ACCA (Association of Critics and Commentators of America) awarded her as the 'Best Female Nightclub Performer' in Florida for three consecutive years. Her success in the nightclub arena continued as she became the premiere Diva of the prestigious Fontaine Bleu Club Tropigala, winning her another ACCA award in 1996. During this period, Ada's foray into song writing, a talent she began to cultivate back in Italy, produced two global hits for the Latin market: 'Alma de gitana' and 'Te Borrare', recorded by Ednita Nazario, in the late 80's. This success prompted Ada to continue composing, expanding her style to different genres. As the new millennium began, a new chapter in Ada's career takes flight, as she starts putting into words and music the personal and spiritual journeys that, while unique to this artist, are themes that are universal to us all. ' ' My latest project is a composite of all that I have learned as a human being, as a woman, and as an artist. I believe that we generate good feelings when we are performing or listening to music, and that these good feelings emanate from us and touch everything and everyone on this planet. I want to bring my audiences to that special Oasis, and inspire them to feelings of love, beauty, goodness, spirituality, romance, and sensuality. And so it is with great joy and love that I open my soul and heart to all of you, hoping that these songs will touch that in you which is romantic ... that in you which is loving ... and that in you which is Divine ...' Achievements *Earned a Masters in Music and Vocal Performance from the Conservatory of Music of Bologna, Italy *Composed two songs (Alma de Gitana and Te Borrare) that were hits in the Latin market all over the world. Alma de Gitana was listed on Billboard's Top Ten. *Composed classical religious songs that have been performed throughout South Florida *Has Been Nominated and Won the ACCA award for Best Night Club Performer four times and also received great critic acclaim for her performances in the local newspapers (ACCA -Association of Critics and Commentators of America) *Successfully Performed Weekly on Channel 51, Buenas Tardes Miami in a Program created by Ms. De Luque called ' Nostalgia' remembering old Latin songs and boleros *Won high acclaim in performances of opera, concerts and recitals in Italy, Germany and the USA. For example, after singing Mimi in La Boheme in Forli, Italy, one critic exclaimed that Ada was '...the one Mimi that Puccini himself would have been happy to have seen and heard...'