Kickin Grass - Walk with Me 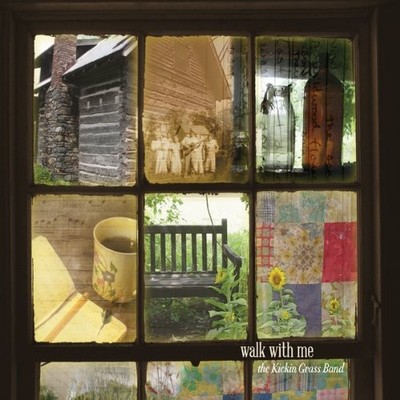 The Raleigh-based Kickin Grass Band is known for their unique bluegrass style-equal parts vintage and nouveau. On Walk With Me, their newest album on Superfan Records, the group delightfully stretches and builds each song beyond the edges of their firm footing in bluegrass. By following their muse down complementary paths of Old-time, Americana and folk, the Kickin Grass Band has created an album that will appeal to a broad roots music audience. Half of the songs were penned by signature vocalist and main songwriter Lynda Dawson, with assists from newest members fiddle player Pattie Hopkins and banjo player Hank Smith. The remaining cover songs were chosen to spotlight the personalities of the individual band members, but also to play on their strength as a cohesive unit. Vocals are passed back and forth between Dawson's soaring lead on five of the tracks, Hopkins's bluesy sound on two, bass player Patrick Walsh's ethereal tenor on two, and mandolin player Jamie Dawson's retro-tinted lead on one, with tasteful harmonic seasoning throughout. Even with shifts in instrumentation, arrangement, narration and guest players, there remains a distinctive Kickin Grass Band sound that threads the tunes together, creating a colorful, mosaic tapestry of an album, and an expertly-crafted package of rootsy Americana-style bluegrass. The band deliberately approached this project as a full-length record. Walk With Me presents an exploration of life's passages, a close-to-home chronicle of heartbreaking loss and hopeful beginnings. Band members endured 3 years of ups and downs that started with the loss of Walsh's wife to an excruciating battle with ovarian cancer, crested with the birth of beautiful daughter to the Dawsons, and then took another plummet with the sudden and unexpected death of Jamie Dawson's brother. "These were life-altering events for all of us, both individually and as bandmates and close friends," explains Lynda Dawson. "We felt strongly that we needed to capture and express the emotional journey we had endured through our music, especially now that we're on the other side looking back." The album starts with a three-song thematic overture, transitions through an atmospheric instrumental, broadens it's scope through seven character-driven vignettes, then transitions back through an up-beat instrumental to close with a finale track that brings the journey-and the listener-full-circle. The songcraft and arrangements weave together rich and warm bluegrass, Americana, gospel, folk, Celtic and alt-country sounds to tell a nuanced musical story of grief, exploration, hard-won acceptance and understanding. The band shines when tapping their bluegrass roots on tracks like the Bill Monroe instrumental "Roanoke," pushed forward by the driving rhythm of the traditional five-instrument bluegrass lineup (fiddle, banjo, mandolin, guitar, bass), or "Sugar," where their signature vocals tug on high-lonesome heartstrings with bittersweet 3-part harmonies. On "The Filling Station," a haunting Hammond B-3 organ, underpinned by a clawhammer banjo drone, immerses the listener in a deep-south mysticism, while the sparse, rootsy vocals of the title cut Walk With Me would be right at home on the O Brother Where Art Thou soundtrack. And the presentation of understanding in the final cut, 'Everything & Everyone,' provides a sense of closure to satiate the listener even after the music has ended. The five band members hold down their respective instruments on the album with the exception of a few swaps, and guest appearances are scattered throughout with Andrew Marlin (Mandolin Orange) playing Hammond B3 organ on "The Filling Station", Jerry Brown (Shady Grove Band/The Rubber Room) playing fingerstyle guitar on a cover of Joe Ely's "Kings Highway", and a return guest appearance by former banjo player Ben Walters playing acoustic guitar on Dawson's "Everything and Everyone." Walk With Me was recorded and co-produced by Jerry Brown at the Rubber Room, with artwork and design by Gamil. To take in the album as a singular experience is to travel with the group from a questioning uncertainty to an understanding acceptance. The message: the big answers may be beyond our grasp, but our communal search for them binds us together. If you look hard enough you may just find an answer-and a comfort-in the people who walk with you.

Here's what you say about
Kickin Grass - Walk with Me.