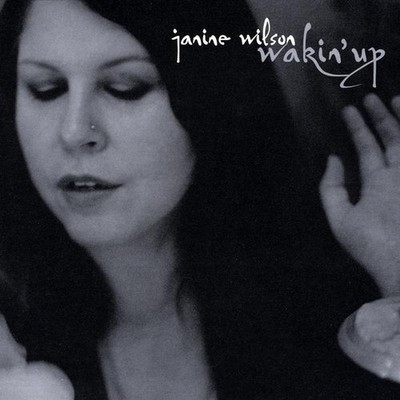 Janine Wilson's name carries with it certain expectations. A big voice with a stage presence to match it. Award-winning songs full of love, heartache, and mischief. A command of vocal styles ranging from the blues to Americana roots rock. And while those expectations will not go unfulfilled with her next album, don't let the familiar face on the cover fool you. It's time to wake up to a very different Janine Wilson. Her third album since releasing the debut The Blue Album in 2000, Wakin' Up is Janine's first album of all-original material, making it her most personal artistic statement to date. Building on the same partnership that delivered the award-winning songs "Don't Even Start" and "So Long," Janine teamed up with guitarist extraordinaire Max Evans (Ugly Americans) to write the songs that would eventually belong on Wakin' Up. Once the writing was complete, Janine approached maverick recording artist Blake Morgan, founder and president of NYC's Engine Company Records, in the hope of having him produce the album. Morgan proceeded to do one better, putting together an incredible band of top-flight New York musicians for the recording sessions-Jonathan Ellinghaus on drums, John Turner on bass, Melissa Giges on backing vocals, and even providing Wurlitzer, Hammond B-3 organ, and backing vocals himself. Together with Evans playing guitar, Janine's powerhouse vocals have never been in front of a more solid or sophisticated sound. The album opens with another award-winning track, "It Should Be Me," and though this song appeared on Wilson's 2005 album Save Me From Myself, the similarity ends there. With new songs, a new producer, and a new band, Janine has also found a new kind of confidence. Her voice now shares it's usual outspokenness with a more open vulnerability, amplifying the natural sultriness of her delivery. The opening guitar licks of "Just Kiss Her" make it apparent that this vulnerable side of Janine Wilson hasn't softened her, a fact mirrored by the directness of her lyrics ('You keep wasting your time / While I'm standing here / Offering mine / And it's all right here for you'). The heartache and pain are palpable in her phrasing as she sings "Disappear," a rock ballad reminiscent of Sheryl Crow, contrasting with the masked denial found in Evans's "Not For Real" ('I don't take anything to heart / I'm just a million and one false starts'). With the pseudo-title track "Wakin' Up in Texas," a new direction starts to appear, blending her bluesy roots with a pop-rock sensibility more akin to Chrissie Hynde and The Pretenders. The desperation of her lyrics draws you in as the first half of the album ends, and as the second half begins, the sweetness of the acoustic guitar on "Only One In Love" capitalizes on that closeness, commiserating the loneliness of unrequited love ('I let you take my hand / Let myself have too much fun / Too bad I'm the only one in love'). The pop-rock angle continues in "Kiss You At Hello," a shamelessly hopeful song of love at first sight. Janine sings about the urgent need for green living during today's hard times ('When the markets crash and the headlines flash / That there's no end in sight / You've gotta learn to live with less I guess / And make the wrong things right') in the alt-country-tinged "The Grass Is Always Greener," followed by an equally passionate plea to not waste an opportunity for love in "Rustin' In the Rain." Janine shares the vocal spotlight with Evans on this one, leaving you wanting to hear more of this duo. Recorded with Blake Morgan at the helm of Engine Company Records's studio in NYC and at Philadelphia's Studio 4 with Grammy Award-winner Phil "Butcher Bros." Nicolo, Wakin' Up proves to be yet another step in Wilson's continuing evolution. So how should we feel wakin' up to this new Janine Wilson? With a newfound confidence behind her eyes, she smiles and answers by quoting from the last song on the album. "Hey-in the end, 'It's just you and me . . . like always.'"

Here's what you say about
Janine Wilson - Wakin' Up.