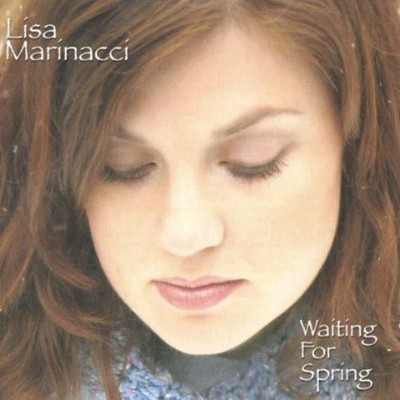 'Passionate, warm, fiery, amorous, sympathico, tender, demonstrative, pleasing, robust, whimsical, amusing, fanciful, well-rounded...Lisa's disc affirms the fact that the world wouldn't quite be the same without music.' George W. Carroll/The Musicians' Ombudsman 'The clarity of her projection is awesome. There is no pretense in her voice. I love the sense of innocence that she has. It seems to come from a genuine reverence for the music. Totally amazing.' -Mark Kleinginna, jazz fan With her dynamic voice, Lisa Marinacci combines the sentiment and sincerity of yesterday with the contemporary sound of today. Produced by both Lisa and famed jazz guitarist Joe Negri, Waiting For Spring features 11 tracks, both old and new, and features a swinging quartet of Joe Negri on guitar, Max Leake on piano, Brian Stahurski on bass, and Thomas Wendt on drums. Born and raised in Pittsburgh, Lisa began singing and performing at a very early age. When she was 5 years old she made her professional debut with Maureen McGovern at Heinz Hall in 'The Sound Of Music', and since then has performed with The Pittsburgh Pops conducted by Marvin Hamlisch, Stephen Schwartz, The Pittsburgh Civic Light Opera, Royal Caribbean International, and with The Hilton Head Jazz Trio, among others. The history of jazz music in her family spans several generations, as both of her grandfathers were musicians, and her cousin Bob Cooper played saxophone with The Stan Kenton Orchestra and was married to jazz singer, June Christy. Early in her career, Lisa began working live and on television with well-known jazz guitarist Joe Negri (of the television show, 'Mr. Rogers Neighborhood'). One of the most influential jazz guitarists of his time, Mr. Negri was instrumental in introducing Lisa to the world of jazz and standards, involving her in programs like 'Jazz for Juniors'. Lisa earned both her undergraduate and graduate degrees from Carnegie Mellon University, and relocated to New York where she has performed at Donnell Hall, with AMAS Musical Theater, and with the NYC Fringe Festival. While spending most of her time working and performing in NYC, she still considers Pittsburgh to be her home. Lisa enjoys singing all styles of music, and is also a writer and actress. With arrangements done by Joe Negri, 'Waiting For Spring', contains 11 tracks of both new and old tunes. The title track was written by Mr. Negri himself, and has never before been recorded.

Here's what you say about
Lisa Marinacci - Waiting for Spring.