Craig Jacks - Waiting for My Angel 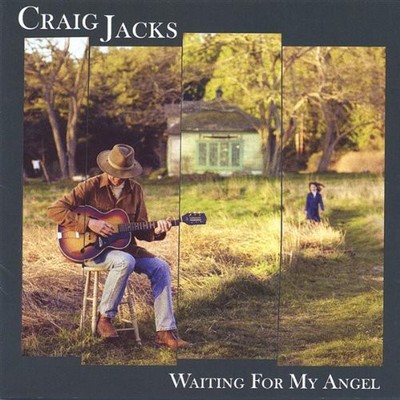 Craig Jacks and The Mighty Jackalopes bring you a most joyous sonic marriage of finely crafted originals and crowd-pleasing covers from the likes of Lucinda Williams, Neil Young and Steve Earle. You can definitely hear their influence on Craig's writing. From the driving wheel feel of 'Make Up Your Mind' (You can just picture the smile on Craig's face as he let's out this joyful scream late in the song), to the haunting strains of 'Old Mountain Town', and the more whacky and playful jaunts: 'Burnin' Tires' and 'Hot Set In The Old Town'. This joyous sonic marriage has brought out enthusiastic crowds all over B.C. and the U.S, and now, Craig Jacks and his Mighty Jackalopes are ready to take Vancouver by storm! His 'Waiting For My Angel' CD is a fine representation of what he's like live. Although you won't be privy to his facial expressions, and his spirited direction of his band through hand signals, head bobbing and tireless meandering all over the stage, you will be privy to his distinctive growl and some highly memorable and enduring songwriting. I'm not the first to acknowledge this: Longtime Polygram notable, John Redmond sited Jacks as one of Canada's top songwriters. Besides his songwriting prowess, Craig Jacks was also the proud owner and musical guru behind one of the finest recording studios in Vancouver. Along with Producer and fellow Jackalope, John Shepp, Utopia Parkway Studios was a highly creative and welcoming home to some of the biggest and brightest in the music scene, including: Matthew Good, Pure, Bocephus King and Motion Soundtrack to just scratch the surface. Along with leaving an invaluable mark with his recording studio, the one time A & M recording artist has also earned his reputation as an artist that's always been true to himself and his music. From a more Pop-Rock influenced singer-songwriter style to his current Roots calling, Jacks has never been afraid to carve out his own distinct slant on any genre of music he chooses, regardless of trends or fashion. He opts for a more lasting brand of solid songwriting and well thought out arrangements as opposed to the quick-fix of throwaway riffs and catch phrases. This approach has won him the admiration of some of the most gifted players and singers ever to roam this earth: Zubot & Dawson, Bottleneck's Robyn Carrigan, Crash's Mike Kenney, Terry Jacks, and Shelley Campbell, all make appearances on Craig's album, as well as his own Jackalopes.

Here's what you say about
Craig Jacks - Waiting for My Angel.