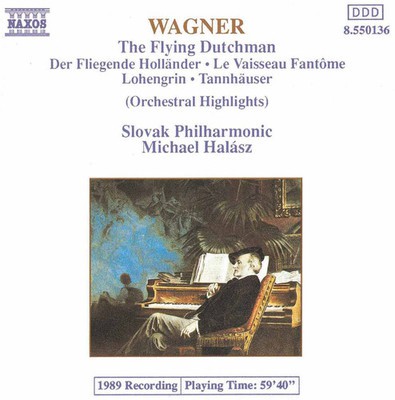 The tetralogy of The Ring, based on a conflation of Teutonic and Scandinavian legends, was originally conceived while Wagner was enjoying his first real success as conductor at the opera in Dresden, where Rienzi, The Flying Dutchman and Tannhäuser were first performed. In 1848, with revolution in the air, Wagner began work on the poem concerning the death of the hero Siegfried, a text that was to serve as the basis for the fourth opera in the cycle, Götterdämmerung. The Flying Dutchman has it's literary source in the seventh chapter of Heine's Aus den Memoiren des Herren von Schnabelewopski, used by at least one earlier composer to provide the libretto of an opera. The story of the phantom ship and it's haunted master appealed even more to Wagner after his own experiences at sea, when he was caught in a storm, sailing from the Baltic port of Pillau to England, to take refuge from his continental creditors in 1839. Sheltering in a Norwegian fjord, he was reminded of Heine's story, resulting in the composition of the libretto and music of the new opera, completed in Paris in 1841. The work was first staged at Dresden in 1843, leading to his appointment as conductor at the opera-house there. The Overture to The Flying Dutchman, with it's story of the legendary haunted Dutchman, fated to sail the seas in his ghostly ship until redeemed by true love, sets the scene of what the composer described as a storm-swept ballad. Leit-rnotifs, themes or fragments of themes, appear and re-appear, dominated by the horn call associated with the Dutchman and the rushing strings of the sea and wind. Another theme that appears in the Overture is associated with Senta, the girl who loves the Dutchman and dies for him, as he sails away in apparent disappointment at what he believes to be her betrayal. Her sacrifice brings him final redemption. The Prelude to Tannhäuser includes a number of themes and motifs that have later importance in the score. The sound of the Pilgrims' Chorus is heard and a motif of repentance, contrasted with the Venusberg music and the Hymn to Venus. The Dresden version of the overture ended with a return to the Pilgrims' Chorus, while for Paris Wagner led straight into the Bacchanal, a pagan celebration of love. This is the Venusberg music of the first act. The entrance of the nobility in the second act is accompanied by a festal march, followed by the entrance of the contestants in the song contest on the subject of love. The introduction to the third act gives a musical account of Tannhäuser's pilgrimage to Rome, in search of absolution. The Prelude to Act I represents the mystical appearance of the Holy Grail, growing in radiance as it descends to men, and disappearing again, as the overture comes to an end, after celebrating the triumph of Lohengrin's divine mission. The third act is introduced by music for the wedding celebration of Elsa and her mysterious knight and champion.