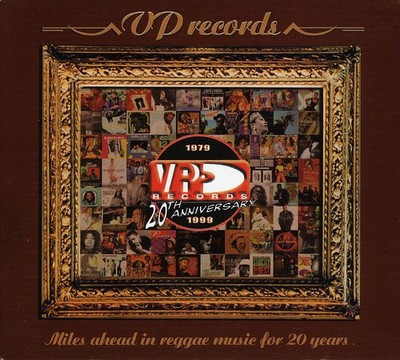 Track list includes: "One of the Poorest People" by Junior Tucker, "Sitting & Watching" by Dennis Brown, "A Wah Do Dem" by Eek-A-Mouse, "I'm Getting Married in the Morning" by Yellow man, "Come Fe Mash It" by Tony Tuff, "I've Lost My Sonia" by Cocoa Tea, "Ring the Alarm" by Tenor Saw, "Boops" by Super Cat, "Sara" by Frankie Paul, "Telephone Love" by JC Lodge, "Sorry" by Foxy Brown, "Twice My Age" by Shabba Ranks/Krystal, "Tempted to Touch" by Beres Hammond, "Murder She Wrote" by Chaka Demus & Pliers, "If I Ever Fall in Love" by Sanchez, "No Guns No Murder" by Rayvon, "Anything for You (remix)" by Snow feat. nadine sutherland, Beenie Man, Buju Banton, Terror Fabulous, Louis Culture & Kulcha Knox, "Give Me a Reason" by Lady Saw, "Who Am I" by Beenie Man, "Heads High" by Mr. Vegas, "Pull It Up" by Beres Hammond and Buju Banton.

Here's what you say about
Various Artists - Vp 20th Anniversary.