Vox One - Vox One 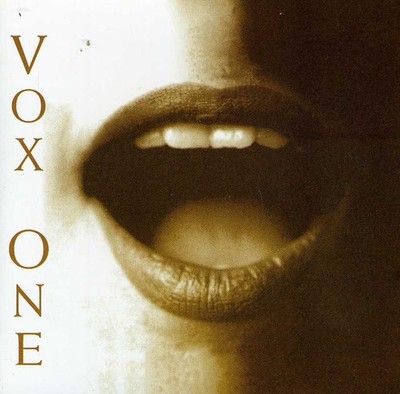 This is the first recording Vox One released in 1993, five years after the group was formed at the Berklee College of Music in Boston, MA. It all started when the founder Yumiko Matsuoka called on her friends to sing one of her arrangements which was a midterm project for a class. Those who gathered liked what they heard when they sang together, and decided to continue singing. Founding members Paul Stiller and Paul Pampinella started bringing in their own arrangements and compositions, and Vox One was born. When Jodi Jenkins joined Tom Baskett (another founding member), Paul, Paul and Yumiko in 1991 the group knew it was going somewhere, and decided to record an album. The album won 'Unsigned Best Professional Album' in Contemporary A Cappella Recording Awards (CARA): Talent in jazz, unlike pop, takes a while to develop. Years of practice, gigging, and lessons begin to pay off if there's potential underneath the technique. Vox One has that talent. All graduates of the Berklee College of Music in Boston, they've slowly been accumulating a following and honing their chops on a batch of fine charts. They have a couple of fabulous lead vocalists, an exquisite blend, a great vocal percussion sound, and lots of class. This album is a very solid debut from a group that is going places. A short intro of songs: Edelweiss: Paul Stiller arrangement of the classic from 'Sound of Music.' Starts off with the gentle treatment of the original, but soon takes listeners to an exciting new world thereafter with reharmonization and meter change. In concerts Paul leads the audience to participate, and they get to share the joy of singing together. My Romance: Paul Pampinella arranged the Rodgers/Hart gem with a swing feel. A new take on the standard that gives a fresh dimension. Why Blue?: Yumiko was lucky enough to be able to gather the best musicians to form Vox One, but as they started to rehearse regularly felt she wasn't good enough among her fellow members. She asked herself 'why are you so blue?' and this was what she came up with. The Water is Wide: Vox One was occasionally hired to sing for weddings, and this was a song that one of the brides asked to sing at their happy event. Yumiko was very much inspired by the Karla Bonoff version of the song when she wrote the arrangement. Respect: Paul Pampinella arrangement featuring Jodi, and she sing her heart out! The group always has much fun singing it, creating all kinds of instrumental sounds backing her up, and it's one of our biggest crowd-pleasers. Ol' Man River: A friend of Yumiko's wanted to hear an arrangment of this Kern/Hammerstein evergreen, so she wrote this. Features Paul Stiller and Jodi solos with a swing treatment and a lot of reharmonizations. Move On: An original by Paul Pampinella that sings of pains and sorrows when a relationship ends. Paul's voice soars against the brooding background vocals. It won the 'Unsigned Professional Best Song,' and the judges wrote: Rarely do jazz and pop meet on good terms. Usually the chords get in the way of the hook, or the pop sensibilities destroy the asymmetry of jazz. But not here - taking a cue from great jazz-influenced pop groups like Toto and Steely Dan, Vox One has served up a winner. My Old Kentucky Home, Good Night!: The Stephen Foster song was used in a TV drama in Japan a long time ago, it moved Yumiko deeply. She chose this piece as her midterm project, and it eventually led to the founding of Vox One. The instructor, late Steve Prosser (who became one of Vox One's mentors) gave an A++++ for the project. Could You Believe: This song by Al Jarreau may not have been a big hit, but it definitely hit Yumiko with such power that when she thought of writing an arrangement to feature Tom Baskett, there was no doubt. Tom's soulful singing has made it another audience favorite. Missin' You: A Paul Stiller original with words by him and his wife Lisa. It takes listeners to the world of sounds only Paul knows how to create, including his inimitable vocal percussion. Amazing Grace: Paul Stiller wrote the original four-part arrangement for Yumiko's wedding, and it was expanded to five parts to include the bride who obviously could not sing during the ceremony. A profoundly spiritual experience for both singers and listeners.

Here's what you say about
Vox One - Vox One.