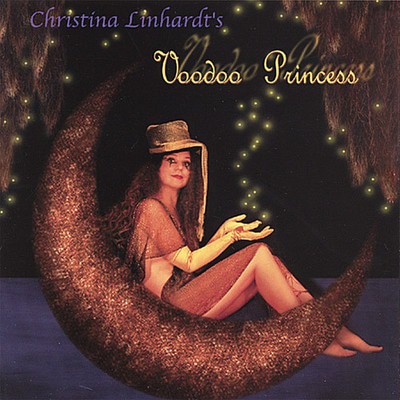 Inspired by her mystical journeys in the Caribbean, 'Voodoo Princess' is the second solo CD of vocalist Christina Linhardt, the 'Diva of the Secret Societies'. Already having a propensity for the magickal arts as a child, Christina searched the globe from the Tropical Islands, to the Middle East, to Southern Africa for esoteric knowledge. Along the way she found love and passion which inspired her second album 'Voodoo Princess'. Disco grooves meet with Reggae flavorings, sprinkled with a touch of Bollywood here, and a smattering of Grand Opera there. A selection of superlative studio musicians graces the tracks: Dino Meneghen on guitar, Doug Livingson on keyboards and steel guitar, Adam Cohen on bass guitar, Steve Pemberton on drums, Angel Luis Figueroa on percussion, Larry Williams on trumpet and flugel horn, Andrew Lippman on trombone,Dan Weinstein on viola, violin and back-up vocals, Lisa Weinstein on violin, Bruce Eskovitz on saxophones and theatrical offerings by actor/ voice-over artist Jeffrey van der Byl. Being inspired by the original 'Little Mermaid' sound-track from her childhood, Ms. Linhardt managed to use her spell-casting abilities to secure the woodwind soloists from that Disney smash hit; Dave Shostac on flute and Tom Boyd on Oboe. Artfully produced by Bruce Eskovitz and Christina Linhardt, engineered by Glenn Nishida of Pacifica Studios. Beware the enchantment of the Voodoo Princess......

Here's what you say about
Christina Linhardt - Voodoo Princess.