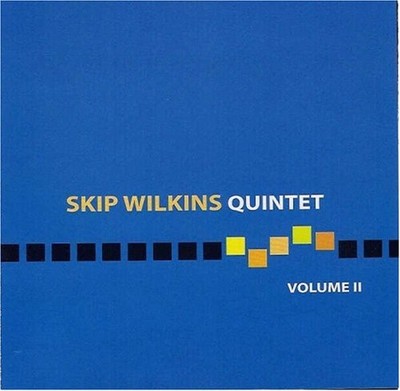 What the critics said about their previous release, Skip Wilkins Quintet: Volume I: 'Culled from three (days of recording at Lafayette College), the CD documents the interworkings of a cohesive band playing over well-conceived material...the quintet makes music marked by an informality and intimacy gained only through close association and mutual respect. Wilkins has penned some very fine tunes here... The camaraderie and compatibility (is) immediately apparent...' - All About Jazz-New York 'For his third disc as a leader, it's easy to suggest Wilkins has come of age as a pianist and composer...easily Wilkins' most impressive music...He wrote and arranged all the tunes. More to the point, his quintet...(has) played these pieces enough to feel comfortable with them, and, even on a first listen, that shows... Wilkins' music has an edge; he's searching for, and more often than not finding, his own voice, which is really what jazz is all about.' - Allentown Morning Call 'Pianist Skip Wilkins goes from soulful, gut-bucket mode to rich ballads to angular modern jazz on this tasteful set of original tunes...full of pleasant, smoky moments.' - Philadelphia Inquirer Skip Wilkins Quintet: Volume II More than ten years ago, pianist and composer Skip Wilkins returned to the east coast in search of new music and new opportunities. Wilkins would find them in Pennsylvania. He had already played with countless jazz luminaries in his native Boston and during eight years living in the West, among them, saxophonists Plas Johnson and John LaPorta, vocalists Mark Murphy and Darmon Meader, trumpeter Conte Candoli, bassist Milt Hinton, and drummers Bob Moses, Joe Hunt, and Peter Erskine. More high-profile performances would follow after his return to the east coast, including with saxophonists David Liebman, Bobby Watson and Stanley Turrentine, trumpeter Clark Terry and drummer T.S. Monk. In January of 2005 Skip gathered some of his favorite musicians in a new group, the Skip Wilkins Quintet. They scheduled three recording dates for May and June at Lafayette College in Easton, Pennsylvania, where Wilkins is a member of the music faculty. Immediately, they began learning the music and performing constantly. The Quintet, with tenor saxophonist Paul Kendall, guitarist Tom Kozic, bassist Tony Marino, drummer Gary Rissmiller, and pianist Wilkins, eventually recorded eighteen compositions by Wilkins in a live remote recording from the main stage of the Williams Center of the Arts on campus. Some groups struggle to record one CD release of original music. This prolific bunch powered it's way to two releases-and they did them simultaneously, a matchless achievement. Wilkins then divided the tracks into two releases, the second of which, Skip Wilkins Quintet: Volume II, is available now. As with the Quintet's 2006 release, Volume I, the ensemble's extraordinary chemistry is apparent. Initially, Wilkins considered releasing the entire work together as a two-volume set, but decided that he would introduce the Quintet better by dividing the work and releasing CDs in two successive volumes. Shortly after the first mixes were available, he divided the tracks onto two CDs, balancing moods and tempos for listening purposes. Over time, everyone in the group came to like the sequence of tunes. Nine tunes ended up on Volume I and nine on Volume II. While the CDs are presented in two volumes, the two recordings are inextricably linked. First listeners to the entire package commented on the intimacy expressed in the music and the intense musical interaction. Clearly, everyone who had been involved with the project recognized these qualities implicitly. Since the release of Volume I, critical response reflects what the first listeners heard. Somehow though, the initial act of separating the eighteen compositions into two releases has yielded a Volume II with even greater emphasis on the Quintet's intimacy. Most of the members of the Quintet feel this way. The writing is partly responsible for this. Tracks like "Used to Be, "Quiet, Please!", "Betrayal," and "Hold Me," on Volume II each have plaintive qualities-particularly "Hold Me," which Wilkins wrote in response to the events of September 11, 2001. But the Quintet plays like an ensemble throughout the entire two-CD project, and these spare, intimate selections merely reveal just how deeply they listen to and respond to each other. While clearly, Wilkins coordinated every aspect of these recordings (as composer, arranger, producer, pianist, business manager and on and on), make no mistake, this is an ensemble effort. The ensemble created this music. All for one and one for all. Since the release of Volume I, the Quintet has attained wider influence. Performing in New York more often now, The Quintet, with it's first release, Volume I, is receiving critical attention and airplay around the United States. Recently, Europeans have taken notice. Wilkins will tour the Czech Republic in August 2007. In countless interviews with print, on-line and radio media, and in conversations with audience members, Wilkins has been asked to relate the stories of these recordings. His music is evocative, and the pieces-and their titles-have prompted lots of inquiries. From Volume I, "Stephanie's Song," and "No Parking," have garnered particular attention. One wonders just who is this "Stephanie," the namesake of the haunting waltz, and one relates to the bumpy rumble "No Parking" as a metaphor for tracking down that elusive parking space in the city. More queries are sure to follow now with the release of Volume II. Hungry for more? Wilkins and his ensemble are presently working on a third recording. They will be back at the Williams Center in June of 2007 recording a fresh set of compositions by Wilkins. Look for their third release in the summer of 2008!