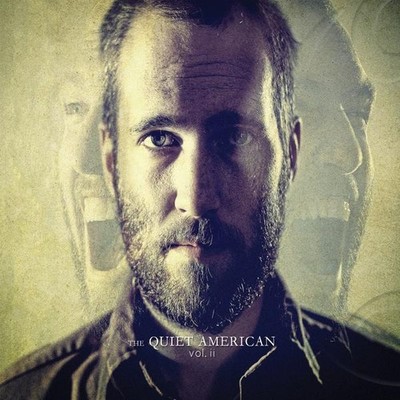 Aaron Keim: Guitar, Ukulele, Banjo, Steel Guitar, Bass, Percussion, Organ, Vocals Nicole Keim: Vocals, Percussion Neil McCormick: Bass Katie Glassman: Fiddle Greg Schochet: Mandolin Produced and Engineered by Greg Schochet Engineered and Mixed by John Macy and Nick Sullivan Musician, luthier, author, historian and songwriter; Aaron Keim is a roots music renaissance man. As The Quiet American, Aaron performs traditional and original folk music on guitar, ukulele and banjo. (which he builds himself!) Inspired by depression era string band music, old timey gospel, lo-fi garage rock and the modern indie-folk scene, The Quiet American is a compelling mix of old and new. After falling in love with music in the school band and choir, Aaron studied music education and French horn in college. He stumbled upon an old time hootenany outside of Cimmaron, NM in 1999, which inspired him to learn the upright bass and start The Paradise String Band. While teaching orchestra in the public schools, Aaron began his career building and restoring string instruments. In 2003, Aaron moved to Colorado and earned a master's degree in music history from University of Colorado. In 2004, Aaron founded Boulder Acoustic Society, which has played over 1,000 shows all over the US, focusing on a genre bending mix of folk, rock, jazz and classical. While traveling with BAS, Aaron taught workshops and masterclasses on roots music, studied banjo, ukulele and guitar with the masters, performed for huge festival crowds and embedded himself in the modern folk scene. In 2009, The Quiet American recorded his first solo record, on an 1890's wax cylinder machine! Like a voice from the past that seems to know the future, this self titled release is a favorite of old time music and audiophiles alike. His newest CD, "The Quiet American Vol. II," is a showcase of Aaron as a solo act. The original songs sound like classics and the traditionals sound fresh and new. Folky dreamscapes, distorted banjo, plunky ukulele and haunting vocals are presented with an old timey, lo-fi approach.