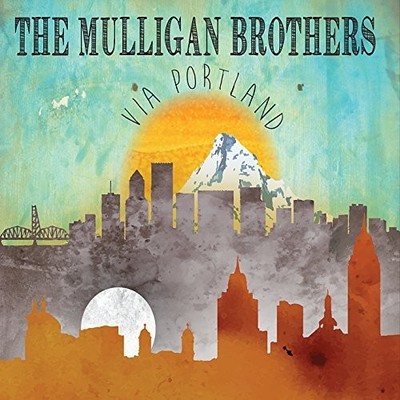 Via Portland is the second album for the band from Mobile and Baton Rouge that met playing in bars in Mobile and took a name that means second chances. Expectations are high for the follow-up to The Mulligan Brothers, their popular debut album released in June 2013 that created passionate fans across the country and was in the Top Ten of CD Sales at the 2014 New Orleans Jazz Fest. The lyrics in Via Portland are built on Newell's poetic imagery and storytelling in a warm, sincere voice that is full of feeling whether it is relaxed or strained. Touring the country and playing together most nights of the week sharpened harmony, background vocals, and dynamics in the instrumentation. New songs evolved in front of audiences, giving each musician time to develop his parts and how they fit together. 'This album is honest and sincere from the ground up,' lead singer Ross Newell says. 'We stayed true to ourselves. "The Mulligan Brothers are: Ross Newell (lead vocals, guitar, and songwriting); Gram Rea (fiddle, mandolin, viola, harmonica and vocals); Ben Leininger (bass and vocals) and Greg DeLuca (drums and vocals). --------------------------------------- An easy wind blows off the gulf coast and the light sway generated by the breeze is picked up by Mobile, Alabama's The Mulligan Brothers... Bright acoustics flash with a quiet fire in the hands of The Mulligan Brothers. The tender string plucking of "Kaleidoscope" let's the notes tumble like the jumbled colors spin inside the song title as a fiddle offers a welcome to the "Red Dress Lady" as she makes a belated appearance....The Mulligan Brothers presents Ross Newell's warm-honey volcals finding inspiration in the words of a train-traveling transient ('Thrift Store Suitcase') and get their affairs in order, saving a big chunk of themselves for the woman who will always be in their hearts ('Momma Gets My Soul').-Alternate Root Magazine The Mulligan Brothers have emerged as a serious up-and-coming talent. The Mulligan Brothers play a unique brand of folk music, oscillating between Americana and country western while incorporating elements of the blues. OffBeat Magazine There is no better album that has been released this year, and I get albums from around the world every day. The Lumineers, Jake Bugg and The Mulligan Brothers are my top three albums of the year.-Tony Plosczynksi, host of 92 New on 92 Zew in Mobile, Alabama 'There is a synergy with The Mulligan Brothers. All of the musicians have played around town for years but somehow it came together for them in this band. I play them on the radio, but I also listen to them in my car. Knowing them makes you like their music even more. They are part of a unique sound that is developing in Mobile.' -Catt Sirten, host of Radio Avalon in Mobile, Alabama The Mulligan Brothers was voted 'Alabama Album of 2013' by readers of the Mod Mobilian. "Armed with a violin, acoustic guitar, drums and an upright bass fashioned from two old suitcases, the Mulligan Brothers, a quartet from Mobile, Ala., stand dead center at the crossroads generally defined as Americana. Folk, country and blues all factor into the sound, as Ross Newell's nuanced, radio-ready voice brings the band's story-songs to vivid life." - Keith Spera, NOLA.com ^ The Times-Picayune 'If you don't know of The Mulligan Brothers yet, you will soon as this emerging Mobile, Alabama band makes it's way to the Lagniappe Stage at the New Orleans Jazz Fest this May to show off their knack for writing fine Americana, folk songs and their comfort and talent as a band, even though they've been playing together for less than two years.'- Kelly Neilson AXS Music 'You guys wowed me and I told you we would play you on KROK-FM. My program director loved 'Sensible Shoes' and will add it to the rotation.' -Richard Barnickel, Station Manager for KROCK.

Here's what you say about
Mulligan Brothers - Via Portland.