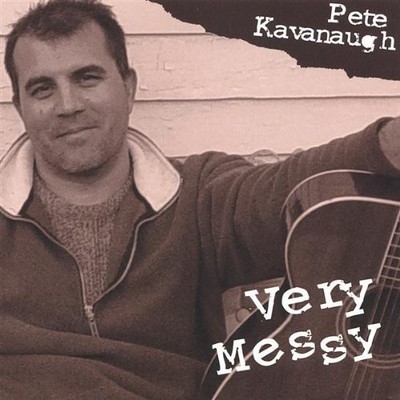 BY JOHN ZIEGLER Duluth News Tribune - 07/17/2008 For decades, the Twin Cities has been loaded with outstanding Blues talent. Impressive musicians and bands abound at countless tiny hole-in-the-wall clubs and bars. Thus, it's not unusual to come across a wonderful talent that you're completely unaware of, even if they've been on the scene for a while. For me, Pete Kavanaugh is one of those discoveries. His disc "Very Messy" displays his guitar prowess. He's not trying to be another shredding, Blues-Rock monster. He's adding subtleties and unpredictable nuances to a genre that is all too often content to regurgitate the same components and rest on it's collective laurels that of being the music at the core of virtually all American popular music. Listening to the "Very Messy" tracks, I hear bits and pieces of Blues-Rock legends from the last 30 years: the keen in the pocket style of Eric Clapton, the full-throttle Texas roadhouse feel of a young Stevie Ray Vaughan, the biting Telecaster electricity of Albert Collins and the sizzling slide wizardry of Johnny Winter. But these influences are only part of the story. These are icons whose playing has spilled into millions of Blues artists' styles the world over. The spices that make the Kavanaugh gumbo unique are the unexpected twists and subtle references that make you say "oh yeah!" There are David Gilmour-like atmospheric swirls and unusual note choices reminiscent of Mike Stern, who played with jazz great Miles Davis. Chunky open-tuned rhythms feel like Keith Richards, and Jeff Beck's singular melodic approach to the guitar seems present. It's a mix intriguing to players and fun for listeners. " I Fell Down" started with a weird guitar tuning that Kavanaugh was fooling around with. The song lyric morphed into an unrequited love song with a "how could you do that to me" attitude. But what stands out here is the way in the middle of the track, an Irish sensibility shines through, even in a 12-bar blues framework. It simply raises the tune up and says "this ain't just another run-of-the-mill Blues disc. David Lindley, though rarely mentioned among the slide guitar greats such as Duane Allman, Sonny Landreth and the aforementioned Winter, is one of the finest slide players ever. Kavanaugh evokes Lindley's abandon and devil-may-care attitude with the bottleneck on the tune "You Got To Me." It's a sweeping kind of slide playing that produces rainbows of sound more than just linear ideas. This one has lyrics that bespeak a resigned mindset. But, as throughout the disc, it's the guitar that talks loudest. "Knowing Voice" is a punchy tune about listening to your inner voice, something we don't always pay the proper amount of attention to. Kavanaugh seems to be striving for that Jeff Beck-kind of guitar sound. It's fun to hear someone just go for it not seeming to be afraid to fall down. "The Quiet Part Of Hell" sounds like it was written by someone who knows more than a tad about living a dark life of drugs and drink. The controlled feedback on the tag seems to say that the quiet part of Hell isn't so quiet. It's another part of this project that is based in the Blues but adds colors and hues that broadened the scope and garnish a style that, at times, can use it. Bassist Nick Salisbury, who has played with Mick Sterling and G.B. Leighton, said of Kavanaugh that playing with Pete is like playing jazz with three chords. It's a fitting tribute to someone who comes from the tradition, but wants to expand upon it and someone who refuses to stick to the tried and true or to play it safe.

Here's what you say about
Pete Kavanaugh - Very Messy.