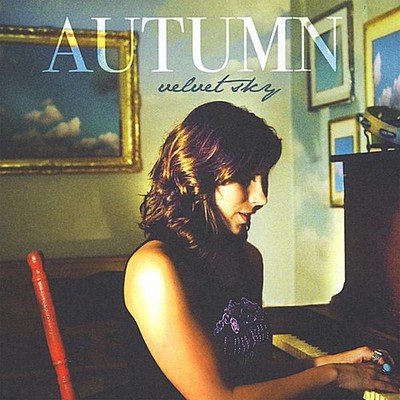 Autumn\'s sophomore album, \'Velvet Sky\' is a love letter to the moments in life that enliven our spirits, stir our dreams, and touch our souls. Marking a significant artistic stride, Autumn\'s eloquent performance and seasoned songwriting resonates wildly throughout, shining deep into the heart of life. Influenced by a mosaic of sounds, \'Velvet Sky\' is a medley of gospel-inspired balladry and Texas folk/americana, masterfully fused together with Autumn\'s unique style and sensibility. Teaming up once again with producers Walt Wilkins and Tim Lorsch (Sugarcane, 2006), \'Velvet Sky\' combines uncluttered instrumentation with potent, expressive vocals, creating a sparse yet resounding musical experience. Along with seven new originals including \'Rain Down\', \'Trees\', and \'Higher\', Autumn enlists Walt Wilkins's songwriting dexterity, performing his tracks \'Velvet Sky\', \'Lessons Never Learned\', \'Trains I Missed\' and the Wilkins and Liz Rose collaboration, \'We Made the Spirits Move\'. A galvanizing version of Patty Griffin\'s \'Nobody\'s Crying\' compliments the vulnerable cadence of four other Autumn originals, \'Sunny\', \'Cowgirl Confessions\', \'Eagles\', and \'Paint\'. Serving as the female sidekick for the #1 rated \'JB and Sandy Morning Show\' on Mix 94.7 KAMX Austin, Autumn\'s listening fan-base quickly bloomed throughout Texas with the release of her first album \'Sugarcane\'. The Oklahoma native first took piano lessons at age 7, her repertoire soon expanding to voice, drums, flute, and guitar. With scholarship offers from across the country, Autumn chose the prestigious music program at the University of Texas in Austin, graduating in 2004 with a degree in Classical Piano. She attests that it was during these formative college years, she discovered and honed a talent and desire for songwriting. \'Velvet Sky\' was recorded in Nashville, Tennessee at the Dog Den, engineered and mixed by Bill McDermott. Also recorded in Austin, Texas at Jumping Dog, engineered by Rob Flynt, with a live recording of piano/vocal on \'Paint\' at The Zone in Austin, Texas. In addition to Autumn on vocals and specific piano and organ tracks, she is joined by Sam Baker, Tina Mitchell Wilkins, Ryan Turner, Walt Wilkins, Josh and Christy Grider, Tim Lorsch, and renowned Texas hippietonkers, The Mystiqueros.

Here's what you say about
Autumn - Velvet Sky.