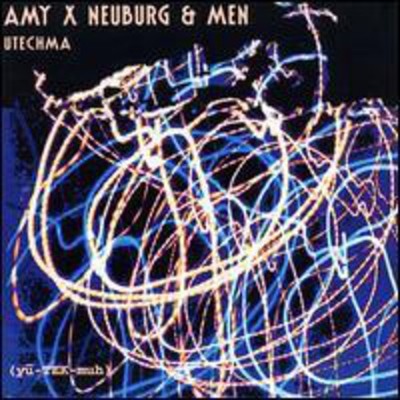 With wildly varied influences, Amy and her Men (Herb Heinz on guitar, Tim Root on keyboards, and Joel Davel on MIDI mallets) are groping around to find their 'sound' in this first release, and the result is enjoyably eclectic, with songs ranging from artsy-fartsy to intimate to world-beat. The Men pipe in with quirky vocals and the occasional short improv. This review in Musician Magazine sums it up nicely: 'Though little known outside of San Francisco, Neuburg makes music whose dizzy mix of complexity, accessibility, and intensity are matched by few. For frame of reference, begin with Frank Zappa: Neuburg shares his fondness for percussive ostinati (the multiple marimbas of 'Delirium'), and a willingness to segue from polyrhythmic snarls to straight-ahead riffing. She can bait a tune on the kind of hook that sinks and settles: 'Into That Hole,' with it's synth peeps and drones, waterfalling guitars, and hypnotic whispered vocals, is a Cocteau Twins flashback, while the album's opening cut, 'Chinatown,' is a 9/8 tangle, with rhythms twining and loosening around dissonant guitars that blare like car horns in a traffic jam. On the title track, Amy rocks the rafters with a weird mix of Celtic pipe music, Nigerian pop, and film noir. Laurie Anderson would be proud. But Neuburg's art is too diverse to be derivative. She has that rare gift of using sound and lyric to create a real sense of place. A techno-poppish tune, 'Get That Camera Out of Here,' stops suddenly, leaving a single synth tone hanging in the air; from this foundation Neuburg builds the next cut, 'Fish,' which seems to begin as the musings of a drowning victim. 'That must be a police car 'cuz there's that sound/So I try to pull over but there's no ground,' she sings over open space and chords that float like seaweed in the tides. Chaos and noise follow, but at the end we're left with a couple of wispy chords, an in-your-head guitar buzz, a water drip, and an affirmation that 'I died laughing.' All this may seem a little pretentious, but Neuburg pulls it off with virtuosic aplomb. The Men ace her arrangements with humor and discipline, while Amy darts from synth to drums and lays down vocals which betray a theatrical sensibility. Now and then the band erupts in spasmodic improvisations called 'Man Jams,' which seem to function as catharses for those who find Neuburg's charts too confining. But the music works best when she holds the reins and challenges the listener to hang on.' [Robert L. Doerschuk]

Here's what you say about
Amy X. Neuburg - Utechma.