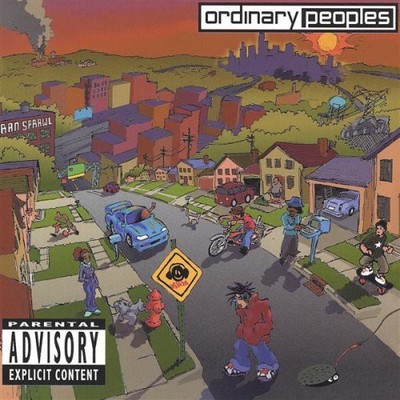 BE SURE TO CHECK OUT THE NEW ALBUM - 'Nothing Left to Lose' @ cdbaby.com/CD/ordinarypeoples The excitement of innovation never stops for Ordinary Peoples. Coming out of Ohio's kinetic music scene, the multitalented trio cooks up an unstoppable dose of charisma and an intoxicating mixture of fun. On their third full length CD, 'Urban Sprawl', O.P. showcases their distinctive abilities, flowing from one feel to the next. Old school boom-bap, new school bounce, and hook-laden soul are all represented, yet the sound remains cohesive--glued together with superb wordplay and overall musical ability. With 'Urban Sprawl', O.P. exhibits a mixture of mainstream and underground styles that could help us all to forget the tired rap clichés heard on radio stations today. Exhibiting a style akin to hip-hop greats such as A Tribe Called Quest, The Fugees, and Jurassic 5, O.P. transcends the typical. Cuts like 'Overflow' and 'A World Without Money' exemplify the band's ability to combine content with catchy hooks and bangin' beats. At their live show, O.P. invites all to listen with open ears and hearts. From hip-hop heads to hippies, the audience meshes together, captivated by the band's powerful vibe. Scraps (MC) uses positive energy and clever rhymes to convey a message that is deeper than you'd expect. The rhymes interlace tightly with the fatback beats laid down by Gerard on his half drum set/half computer creation. Ben Levels utilizes classical keyboard technique to conjure up fat basslines and multiple layers of electronic sound that envelop the listener. His vocal stylings find common ground among heavy hitters such as Andre 3000 and Nate Dogg while still remaining soulful. Together, Ordinary Peoples generates simmering, inventive music that is ready for the masses. 'Urban Sprawl' features a variety of talented special guests. Marc Roberge of O.A.R. collaborates on 'Rise High' and brings a soulful reggae feel to the track. Jerry DePizzo of O.A.R is featured on guitar and saxophone on several tracks, while DJ Kevlar of Poets of Another Breed shows his skills on the turntables throughout much of the CD. Several other musicians are also featured adding to the albums depth and variety. 'Ordinary Peoples don't fall into the harder-than-you trap that captured so many of it's peers, instead contenting themselves to fall between a less rootsy Arrested Development and A Tribe Called Quest.' -Columbus Alive 'With this mixture of specialties, it is no wonder they have developed a unique and organic sound that faithful followers and virgin ears alike can enjoy.' -Ohio State Lantern 'Great overall musicianship and performance ability. I absolutely loved every minute of it.' -IdiotPress.com.

Here's what you say about
Ordinary Peoples - Urban Sprawl.